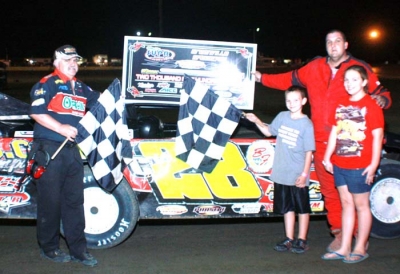 Merchant, a two-time SUPR champ and current points leader, earned $2,500 for his seventh series victory of the season in the 50-lapper. Tippen finished three seconds back in second place with Scott Slay of Clinton, Miss., 12th-starting Jon Mitchell of Nash, Texas, and Gary Christian of Broken Bow, Okla., rounding out the top five. Only the top five finished on the lead lap with 13 of 20 starters running at the finish.

At the outset, Merchant and Ronny Adams made contact on the backstretch, and Merchant's car briefly got sideways. After a lap-two caution for Clay Fisher's spin, Merchant was briefly third behind Tippen and Robbie Start before moving back past Stuart and tracking down Tippen on the ninth lap.

During the race's longest green-flag run through the race's middle stages, Merchant built a half-track margin that was erased by a lap-44 caution for Stuart, who was running in the top five when he coasted to a stop with engine problems. Merchant cruised the final six laps.

Notes: Merchant's Trak-Star chassis has a Wall 2 Wall Performance Engine and sponsorship from, J.D Caver & Co., Bayou Fabricators, J&J Motorsports and Henry's Auto Salvage. ... Merchant won his series-leading 51st career victory. ... The checkered flag waved on the 37-minute feature at 11:43 p.m. ... Scott Slay rallied back to finish third after being in three-car tangle in turn two at the start of the race that forced him to pit to change a left-rear tire. ... Doug Showah's front-end damage from that early incident ended his race. ... David Ashley retired after hitting a tire barrier while battling Allen Tippen and Robbie Stuart for the second spot on lap 16. ... Kevin Sitton lost nearly all his left-side sheetmetal in a mid-race caution, knocking him out on the 18th lap. ... Allen Tippen is driving a MasterSbilt Race Car recently acquired from fellow Louisiana driver Ray Moore. ... Greg Fore got hard charger honors for his 20th-to-eighth run. ... Drivers failing to make the feature: Lee Davis, Bert Chanler, Alan East, Wayne Skinner, Chad Washington, Eddie Provence, Leon Henderson and Jeff Horton. ... Davis scratched from the consolation race with mechanical problems after failing to start his heat race. Skinner had a fluid lead in his heat that ended his night and Washington also scratched from the consolation. ... Following the Labor Day weekend tripleheader is a Sept. 12 SUPR event at Baton Rouge (La.) Raceway, the Late Model portion of the Louisiana State Championship.