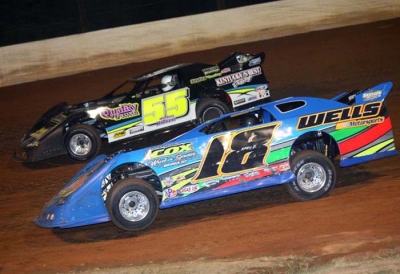 JUNCTION CITY, Ky. (Sept. 4) — Taking the lead on the fourth lap, Victor Lee of Stanford, Ky., stayed in control the rest of the Pepsi 40 on Friday at Ponderosa Speedway for his series-leading fifth victory on the O'Reilly Battle of the Bluegrass DirtCar Series. The two-time series champion and current points leader earned $4,000 for his third straight series victory and 12th of his career.

Eric Wells of Hazard, Ky., chased Lee most of the event in finishing second while Justin Rattliff of Campbellsville, Ky., Mike Marlar of Winfield, Tenn., and David Webb of Nicholasville, Ky., rounded out the top five. Webb rallied back to the front after tangling with Dustin Linville of Bryantsville, Ky., while they battled for the lead on the third lap.

Linville, who led the first three laps, spun in turn two on the fourth lap while trying to fight off a challenge from Lee.

The event was the first of a Labor Day weekend tripleheader that wraps up the season. Saturday's event at 201 Speedway in Sitka, Ky., is followed by a Sunday visit to Tazewell (Tenn.) Speedway.