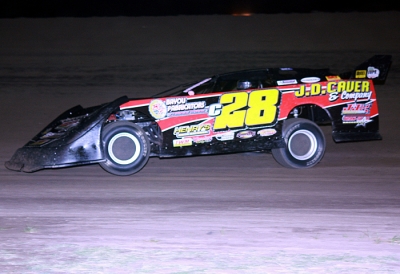 GREENVILLE, Miss. (Sept. 4) — Kenny Merchant of West Monroe, La., the winningest driver in O'Reilly Southern United Professional Racing history, reached the 50-victory milestone Friday at Greenville Speedway by roaring from the rear for a victory. The two-time series champion and current points leader earned $1,250 with his SUPR leading-sixth victory of the season on the Louisiana-based Late Model tour that has held 550 events over 20 seasons.

Although Merchant took the checkered flag five seconds ahead of Jon Mitchell of Nash, Texas, it wasn't easy. Merchant started fifth and was running fourth on the second lap when he slipped over the turn-three embankment, flattening his left rear tire to require a quick trip to the pits.

He restarted in the back, and by the time polesitter Scott Slay of Clinton, Miss., spun out of the lead in turn four for the race's final caution, Merchant was back up to 10th.

Mitchell inherited the lead while Merchant continued his charge toward the front, getting back up to fourth by the halfway point of the 25-lapper. A few laps later, Merchant caught the lead battle of Texans — Kevin Sitton of Baytown was dueling with Mitchell for the lead — and a three-way battle for the point began.

Merchant emerged as the leader on the 18th lap, completing his worst-to-first charge and cruising the rest of the way. Mitchell and Sitton finished second and third followed by Ronny Adams of Greenwood, La., and Gary Christian of Broken Bow, Okla. Rob Litton of Alexandria, La., advanced from his 14th starting spot to finish sixth in the first of two weekend events at Greenville. Slay ended up seventh.

Notes: Merchant's Trak-Star Chassis is powered by a Wall 2 Wall Performance Engine and sponsored by J. D. Caver & Co., Bayou Fabricators, J&J Motorsports, Henry's Auto Salvage and NGK Spark Plugs. ... Merchant, who began racing Late Models in 1994, has won 9 percent of all series events. ... In an event last year at Greenville, Merchant nearly pulled off the same feat, rallying from the rear after an early caution for going off the track. On that night, he finished second to former SUPR champ Ray Moore. ... Moore took the weekend off after an illness left him so dehydrated he made a brief hospital visit for IV fluids. ... David Ashley's race ended after a turn-three accident that involved Dewayne Estes and Lee Davis in the early laps. ... Jeff Chanler and Devane Hillman spun in turn four early in the race to draw a caution. ... Fifth-place finisher Gary Christian ran as high as second early in the race. ... The checkered flag waved on the 26-minute feature at 11:07 p.m. ... Drivers failing to make the feature lineup: Wayne Skinner, Leon Henderson, Josh Danzy, Alan East and Wesley Chanler. ... SUPR competitors continue Labor Day weekend with a $2,500-to-win event at Greenville on Saturday and a $2,500-to-win event Sunday at Champion Park Speedway in Haughton, La.