Hill holds off Weaver for TTDCS victory at Maryville 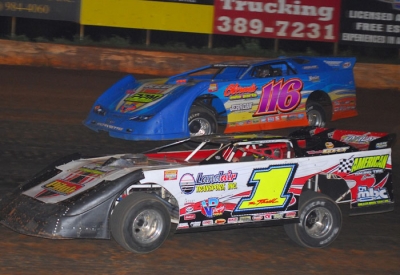 MARYVILLE, Tenn. (Aug. 29) — Vic Hill of Mosheim, Tenn., outdueled Randy Weaver of Crossville, Tenn., in the closing laps at Mountain Raceway Park for a $2,500 victory on the Tennessee Thunder DirtCar Series. The polesitting Hill notched his third series victory of the season in the Mountain Moonshine Classic as he led all 30 laps despite Weaver's hard charge in the closing laps. | Slideshow

The front-row starters Hill and Weaver battled through much of the 30-lapper with lapped traffic spicing the duel in the final laps. Weaver used the high side to pull alongside Hill several times as the leader tried to pick his way through the slower cars.

Exiting turn four on the final lap, Hill nearly got tangled up with a lapped car as Weaver made a high-side move. Hill just held on at the stripe to duplicate his June 20 TTDCS victory in Maryville.

Notes: Hill's GRT Race Car has a Vic Hill Race Engine and sponsorship from Landair Transport, American Race Tire, Petersen Fluid Systems, Pilot and VP Race Fuels. ... The tight series points battle between Tommy Kerr and Billy Ogle continued to tight. They started together on the fifth row with Ogle working up to finish fifth. Kerr ran was high as seventh before he got tangled up with the lapped car of Tony Schrimsher and spun down the backstretch; he ended up 16th. ... Mark Douglas was the hard charger with his 17th-to-12th run. ... The checkered flag flew at 10:09 p.m. ... The series takes a lengthy break before wrapping up the season Oct. 16-17 with $3,000-to-win events at Wartburg (Tenn.) Speedway and Maryville.