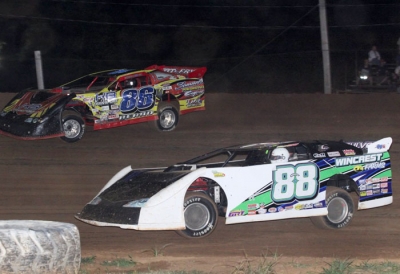 LITTLE ROCK, Ark. (Aug. 29) — Wendell Wallace of Batesville, Ark., took command on the seventh lap at I-30 Speedway and rolled to an easy victory on the O'Reilly Mid-South Racing Association. Wallace, put most of the field a lap down in finishing the three-quarters of a track ahead of runner-up Kyle Beard of Trumann, Ark., who led the first six laps. | Slideshow

Kyle Cummings of Minden, La., finished third ahead of Michael Murphree of nearby North Little Rock, Ark., and Robbie Stuart of DeRidder, La. MSRA points leader Billy Moyer Jr., who rallied from his 15th starting spot, was a lap down in sixth.

Wallace earned $2,000 for duplicating an April victory at the quarter-mile oval southwest of Little Rock.

At the outset of the 40-lapper, the polesitting Beard jumped out to the early lead, running mostly the high groove. After Wallace cleared front-row starter Robert Lovette of Drummonds, Tenn., early, he quickly reeled in Beard.

As Beard rapidly came up on the tail of the field on the sixth lap, he got behind a slower car, which broke his momentum and enabled Wallace to set up his move on the leader. Wallace dipped into the low groove and got past Beard to lead the seventh lap.

All Wallace needed to do the rest of the way was manage lapped traffic as he built a straightaway lead by the halfway point and cruised to his fifth career MSRA victory, tying him for the all-time lead on the 3-year-old tour with Beard.

Just one caution slowed the event, a yellow appearing on the race's initial start when Alan East of Wichita Falls, Texas, and Randy Mitchell of Muldrow, Okla., tangled between turns one and two.

Notes: Wallace's GRT Race Car is sponsored by Wincrest Farms and Delph Communications. ... With Wallace leading, Kyle Beard and Kyle Cummings staged a feisty battle for second in the closing laps. Cummings finished inches behind Beard at the checkers. ... Teenager Austin Rettig of Sikeston, Mo., took a provisional to start the feature and used the car driven by his dad, Alan, because he damaged his primary car in the third heat. ... Besides Alan Rettig, Andy Hockenhull and Wesley Crutchfield missed the feature. ... Five divisions of cars packed the pits at I-30 Speedway in front of the near-capacity crowd. ... Tim Crawley of Benton, Ark., won the sprint car feature. ... I-30 hosts one more Late Model event this season on Oct. 3 for the O'Reilly Southern United Professional Racing tour. ... Next up for the O'Reilly MSRA tour is a Sept. 12 event at Riverside International Speedway in West Memphis, Ark.