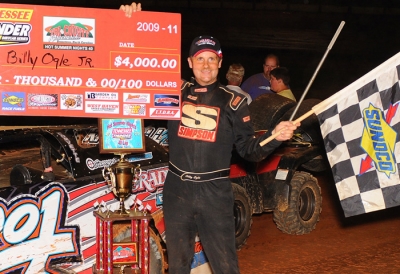 Ogle got tangled up with Shawn Chastain of Murphy, N.C., early in the race, slipping from second to fifth and nearly tagging the frontstretch wall. But in a 40-lap race slowed by nine cautions and a red flag, Ogle patiently waited until the final 10 laps before picking his way back to the runner-up slot as Kerr lost a straightaway lead in the late going.

Ogle slipped under Casey Roberts of Toccoa, Ga., Shawn Chastain and his brother Johnny Chastain to grab second by lap 35, and when Kerr got hung up behind two slower cars, Ogle made a backstretch move to take command on lap 38.

A final caution for a slowing Shawn Chastain set up a two-lap dash to the finish, and Ogle kept Kerr at Bay to sweep the TTDCS weekend. Ogle also won the previous night at Wartburg (Tenn.) Speedway, taking the lead from Kerr with 12 laps remaining.

“My car was not running very well but I think it helped me to stay on the bottom," Ogles said. "The lapped cars helped me out. When me and Shawn got together and I fell back to fifth I thought that’s where I would finish, but I really couldn’t believe how everybody started washing up the track toward the end.

It really opened the door for me and when Tommy (Kerr) moved up to pass (Chris Williams). I just kept it on the bottom and was able to hold him off at the end."

Notes: Ogle's No. 201 is sponsored by Kilby Equipment, Calhoun's Restaurant and Grady & King Construction. ... The 46-minute feature ended at 11:10 p.m.. ... Ethan Hunter of Tiger, Ga., got hard charger honors for his 17th-to-ninth run. ... Tommy Kerr maintains the series points lead but drivers get to drop their worst finish at the end of the year, and as the standings are now, that would move Ogle into the lead. ... The next series event is Aug. 29 at Mountain Raceway Park in Maryville, Tenn., Kerr's hometown track where his only series victory came on Aug. 1.