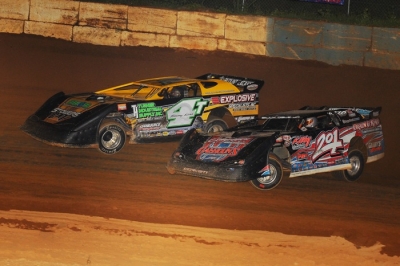 WARTBURG, Tenn. (Aug. 14) — Billy Ogle Jr. of Knoxville, Tenn., led the final 12 laps at Wartburg Speedway for his second Tennessee Thunder DirtCar Series victory of the season. Ogle, whose car cracked and popped as he cross the finish line a car length ahead of his closest pursuer earned $3,000 after coming out on top of a four-way battle for the point entering the race's late stages. | Slideshow

Series points leader Tommy Kerr of Maryville, Tenn., who led the first 28 laps, slipped back to third at the finish behind former series champion Anthony White of Clinton, Tenn., who started sixth. Stacy Boles of Clinton was fourth and Mike Weeks of Friendsville, Tenn., rounded out the top five in the 13-car feature slowed by two cautions on laps 7 and 23.

Notes: Ogle's No. 201 is sponsored by Kilby Equipment, Calhoun's Restaurant and Grady & King Construction. ... The 18-minute feature wrapped up at 11:35 p.m. .... While Ogle officially stands second in series points, the series allows drivers to drop their worst finish at the conclusion of the season. Because Ogle missed a race in June, if he drops that from his points total he's actually leading Tommy Kerr in the title chase with four series races remaining. ... The series completes the mid-August weekend with Saturday's event at Tri-County Racetrack in Brasstown, N.C., before running Aug. 29 at Mountain Raceway Park in Maryville.