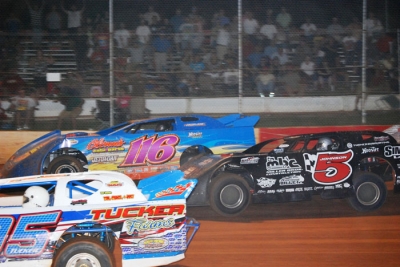 Randy Weaver (116) squeezes by Ronnie Johnson (5) at the finish. (actionshotsetc.com)

Johnson, who started third, was in control on the backstretch on the last of 40 laps, but a slower car in the low groove in turns three and four allowed the seventh-starting Weaver to sweep around for a $3,000 victory, his second of the season on the SRRS tour. | Slideshow of Parker's accident | Slideshow

"It bit me a couple of times early on," Weaver said of the lapped traffic, "but it helped me at the end."

Johnson settled for second with William Thomas of Phenix City, Ala., in third. Fast qualifier and polesitter Anthony Burroughs of Muscle Shoals, Ala., was fourth and Brandon Kinzer of Allen, Ky., rounded out the top five.

The night's preliminaries were marred by Carnell Parker III's scary flip between turns three and four as his No. 75 landed upside down. The Clarksville, Tenn., driver climbed from the car but was put on a stretcher, loaded into the ambulance taken to the hospital to be checked out. Parker suffered fractures to his C-6 and C-7 vertebrae and a dislocated neck and was scheduled to undergo surgery on Sunday, according to the driver's website.