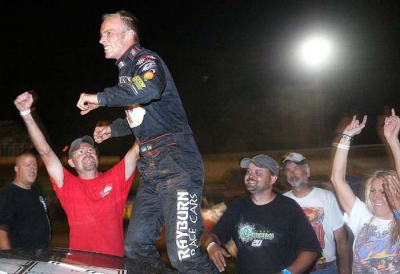 BARDSTOWN, Ky. (Aug. 1) — Making an outside pass on the last lap, Victor Lee of Stanford, Ky., earned $5,000 for a dramatic victory in the 11th annual Bluegrass 50 at Bluegrass Speedway. The series points-leading Lee notched his fourth O'Reilly Battle of the Bluegrass DirtCar Series victory of the season by keeping Terry English of Benton, Ky., winless on the series.

English, who took the lead from David Webb of Nicholasville, Ky., on the 18th lap, was in control of the 50-lapper when Lee began his final charge on lap 46. With English holding the low groove, Lee moved higher on the track as the white flag appeared. Lee pulled alongside English exiting turn two as the frontrunners ran side-by-side on the backstretch into turn three. Lee completed the pass off turn four and won by a half-length before whooping it up in victory lane for his first series victory at the half-mile oval.

English settled for second with Dustin Neat of Dunnville, Ky., in third. Webb and Dustin Linville of Bryantsville, Ky., rounded out the top five. Four cautions slowed the action.