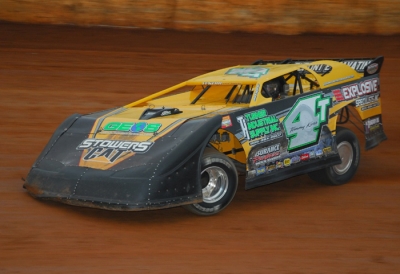 Kerr first fought off Randy Weaver of Crossville, Tenn., the first 14 laps, then withstood challenges from Vic Hill of Mosheim, Tenn., the rest of the way in the 15-car feature. Hill once slipped past Kerr, but one of seven cautions erased the move and reset the field with Kerr out front.

"I don't think the fastest car won because those cautions really helped me out," Kerr said. "Vic must have chosen a harder tire. I was better on the starts and he was better on long green runs."

In a five-lap shootout to the finish after the final yellow, Kerr kept Hill in check, winning by two lengths at the checkered flag.

Notes: Kerr’s Blount Motorsports Rocket Chassis is powered by a Custom Race Engine and sponsored by Blount Excavating, Explosive Specialists and Arnold Trucking. ... Kerr's victory follows his recent championship on the O'Reilly Southern Nationals, a 10-race miniseries. ... David Crabtree got hard charger honors with his 10th-to-fourth run ... With rain threatening, officials hurried the show along and the checkered flag fell at 9:43 p.m.; rain hitting the track about a half-hour later cancelled some of the weekly division racing. ... Feature-race cautions appeared for two solo spins by Tim Rucker (once in front of the leaders), four stalled cars including Mark Douglas (lap 5), Joe Armes (lap 19), Bobby Giffin (lap 30) and Billy Ogle Jr. (lap 35) and once for debris (lap 9). ... Next up for the series is an Aug. 14-15 weekend at Wartburg (Tenn.) Speedway and Tri-County Racetrack in Brasstown, N.C.