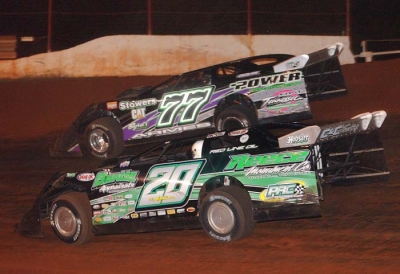 TAZEWELL, Tenn. (July 25) — In the Tennessee finale of the O'Reilly Southern Nationals, a pair of Volunteer State drivers went home happiest Saturday night. Jimmy Owens of Newport earned $5,300 for capturing the 53-lap feature event and Tommy Kerr of Maryville wrapped up the $5,353 championship on the 10-race series over the last 13 days. | Slideshow | Southern Nationals results

Kerr finished just 18th in the 24-car field, but it was enough to earn his first touring championship a night after capturing the series event at Volunteer Speedway in Bulls Gap, Tenn., for the second straight year.

Polesitter Steve Smith of Powell, Tenn., led one lap before departing with mechanical problems, handing the lead to the fellow front-row starting Armes. Armes fought off low-groove charges from Owens through most of the race, sometimes edging away to built a cushion of lapped cars to keep Owens at bay.

Cautions on laps 15 and 19 bunched the field, then the race went green the rest of the way with Owens finally making the winning move on the 45th lap. Armes bobbled slightly a few laps later to let Chris Madden of Gray Court, S.C., slip by and grab the second spot.

That's how they finished with Armes in third followed by ninth-starting Jonathan Davenport of Blairsville, Ga., and Shon Flanary of Mount Carmel, Tenn.

"That was a pretty tough race," Owens said. "(Armes) was pretty good up high, but once the track got cleaned off, the middle started working good for us. He held the lead for quite a while over us, but sometimes it's hard to be out front, especially when the groove's moving around like it was tonight."

Dennis Franklin of Gaffney, S.C., made a 21st-to-11th run at Tazewell to earn PPM Racing Products Hard Charger honors, but it wasn't his best news of the day. The series announced that Franklin was elevated to winner of the July 18 event at Screven Motor Speedway in Sylvania, Ga., because of the disqualification of apparent winner Casey Roberts of Toccoa, Ga. Roberts was stripped of the victory because inspection of a tire Roberts used in the race was discovered to have been illegally treated.

Notes: Owens drives a Bloomquist Race Car with a Cornett engine and sponsorship from Reece Monument and Gantte Appraisals. ... Rain threatened the race at about 5 p.m., emptying the grandstands as storm clouds approached and the skies blackened. While high winds and lightning appeared, there wasn't a downpour as the system edged past the racetrack, perhaps only improving track conditions with a little moisture. ... Jared Landers wrapped up the Red Man-sponsored Rookie of the Year honors on the series. ... With Franklin's inheriting the Screven victory, he and Owens move into a tie for second in all-time series victories with five apiece.