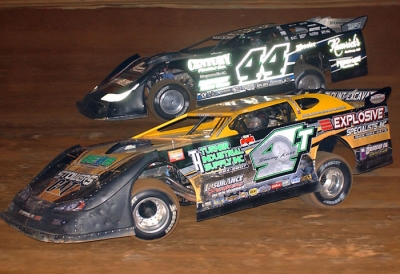 BULLS GAP, Tenn. (July 24) — Tommy Kerr's biggest career victory put him on the verge of his biggest career accomplishment. The 34-year-old Maryville, Tenn., driver led all but the first lap at Volunteer Speedway for a $5,300 victory that virtually assures him the O'Reilly Southern Nationals crown. | Slideshow

Kerr set fast time among a strong, 42-car field at the 4/10-mile oval and outdueled Chris Madden of Gray Court, S.C., early before ruling the rest of the 53-lap feature. Jimmy Owens of Newport, Tenn., finished second followed by Joe Armes of Petros, Tenn., Madden and Hall of Famer Scott Bloomquist of Mooresburg, Tenn., who was making his first-ever series start.

"Considering the quality of the field on hand tonight, this was probably hands down the biggest win of my career," said Kerr, who also won last year's series event at Volunteer. "I know it ain't $10,000 or $20,000 to win one of these races, but that don't really matter. Competition-wise, it was still a bunch of good cars here tonight.

"Jimmy and I are good friends and I'm tickled that he finished second. I knew he was back there, but I also knew if he was better than me, he'd just roll past me and he wasn't gonna rough me up."

Madden, gunning for his third straight series victory in as many starts, led a side-by-side duel the first lap, but Kerr edged ahead while Madden was shuffled back to fifth in the early going with Armes second. Owens was up to second by the 32nd lap, four laps before the race's first caution for a multicar accident on the backstretch triggered when series title contender Jonathan Davenport rolled a left-rear tire off the rim and spun from high to low across the track. The accident virtually dashed Davenport's title hopes.

Kerr resumed his lead and kept Owens in check for two other restarts, following a lap-42 yellow when Jeff Maupin stopped in turn two and on lap 45 after Rick Rogers spun in turn two. Kerr never gave Owens an opening.

"I had nothing for him," Owens said. "He's worked hard and I'm glad to see him win the race. He outrun a lot of good cars. I kept looking for a bobble or something to make a run on him, and I never saw one. He ran a good, solid race and was right where he needed to be.

"I thought I might have a chance in lapped traffic, but when we got there I couldn't maneuver as good in the slower cars as he could. Armes was also better than me in traffic, but we blew past him when a slower car held him up. That's as far as we were gonna go, though. We were just good enough to come home second tonight."

Kerr carries a 52-point lead over Davenport into the finale of the 10-race series Saturday at Tazewell (Tenn.) Speedway. With 48 points the most a driver can gain, he's unofficially assured of the title by taking the green flag in Tazewell's $5,300-to-win feature.