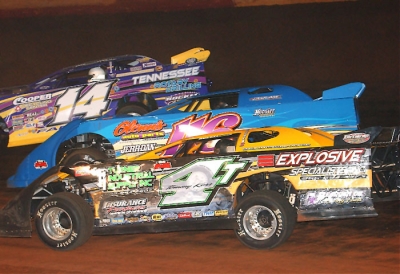 But while Madden, the winningest driver on the 5-year-old tour, was the undisputed $3,500 winner at Crossville Raceway, there was dispute about the rest of the finish. The intriguing, four-car battle for the lead late in the race that saw points leader Tommy Kerr of Maryville, Tenn., spin in turn two on the checkered-flag lap got more intriguing when officials discovered the checkers didn't fall until lap 36, one circuit after the scheduled 35 laps. | O'Reilly Southern Nationals schedule

The ruling to score the official finish in the order the field crossed the start-finish line on lap 35 — actually the white-flag lap — restored Kerr to the runner-up spot and left other drivers in the tight points chase fuming over the decision.

"The race is 35 laps, and people are human and we made a mistake," series promoter Ray Cook said in an interview after the race. "Thirty-four laps were on the scoreboard for two circuits, and I've been told that no one communicated properly with the flagman. In a nutshell, we ran an extra lap that we shouldn't have run.

"I felt it was best to do the right thing and correct it, and I was kinda surprised when everyone was mad about the decision we made. I still felt we did the right thing.

"The racers are arguing that we always race to the checkered flag and I understand that as a racer myself, but we also ran 36 laps and that's not right, either."

On the officially scored 35th and final lap, Madden, Kerr, Davenport, Weaver and Franklin held the top five spots, and that's the way the drivers were paid. Kerr's spin after Davenport slipped underneath him in turn one on lap 36 turned out to be merely a miscue on the cool-down lap. Kerr maintained the series lead with 976 points over Davenport (954), eighth-finishing Tony Knowles (952) of Tyrone, Ga., and Franklin (944).

It was a bizarre ending to a race that started unusually, too.

Three times front-row starters Weaver and Davenport took the green flag, and three times officials ruled one or the other jumped the start. That turned out to be a big break for Madden, who was scheduled to start third but inherited the pole position when officials swapped the first and second rows for the fourth start attempt.

Weaver tried to dive under Madden at the outset to get back out front, but Madden stayed in control comfortably through most of the race as the low groove was the place to be. Following a lap-27 caution, tire wear on Madden's car left him vulnerable and set up the wild finish that saw Weaver, Kerr and Davenport buzzing just behind him. Weaver jumped to the outside in the final laps to take a shot at Madden, but that shuffled him back to fourth amid the tight racing in the final laps.

Madden didn't realize the scoring snafu immediately after the race in victory lane, but he knew his car couldn't have lasted too many more laps.

"We've got a right rear tire that's going down here. It's blistered up pretty bad," he said after checking it in victory lane. "We were just holding on there at the end, but we did what we had to do to win the race."

Notes: Madden drives a Cornett-powered Bloomquist Race Car with sponsorship from Century Plastics, Cushman Paint & Body and Freeman Plumbing. ... Madden has 12 career series victories and also won at Crossville last year. ... After winning the Southern Nationals crown the past two years, Madden elected not to run for points in 2009; this was his first series appearance of the season. ... Randy Weaver ducked into Tommy Kerr's cockpit in the infield following the race to discuss their late battle behind Madden. ... Series promoter Ray Cook was stuck with making a tough ruling after checking the electrical scoring in the controversial event. "We had such a close points battle last year, I wanted to use these transponders this year to make sure we do everything correctly," he said. "When you try to do something right, it doesn't always make everyone happy." ... Cook is a racer himself who fields the D&R Motorsports No. 53 on the Lucas Oil Late Model Dirt Series. The No. 53 was in action at Crossville with fellow Lucas Oil Series and MasterSbilt house car driver Don O'Neal of Martinsville, Ind., behind the wheel. O'Neal hit the wall in hot laps but the team made repairs and he finished 12th in the main event. ... Eight series drivers have perfect attendance through seven of 10 series events. ... Among drivers failing to make the feature: Jim Gray, Kayne Hickman, Junior Brown, Dane Dacus and Daniel Baggerly. ... Dacus and Baggerly were passed over for series provisionals because they've already reached the series limit of two provisionals on the series. ... The series takes a break Wednesday before wrapping up with a three-race Tennessee stretch at Cleveland Speedway, Volunteer Speedway in Bulls Gap and Tazewell Speedway.