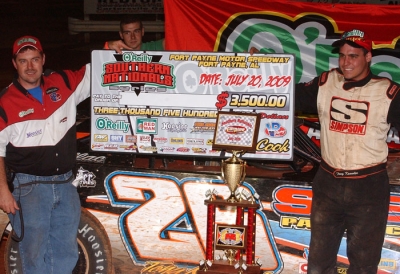 FORT PAYNE, Ala. (July 20) — With a dominating victory Monday at Fort Payne Motor Speedway, Tony Knowles not only got his first career O'Reilly Southern Nationals victory, he stayed firmly in the running for his first series championship.

The 22-year-old from Tyrone, Ga., a member of the famed, Atlanta-area dirt racing clan, started on the pole and led all 35 laps for a $3,500 victory at the 3/8-mile oval in northeastern Alabama. Knowles pulled away easily on two restarts and maneuvered past lapped cars to keep his lead safe. | Slideshow

"We had a good car, and qualifying up front here meant a lot," said Knowles, who ran the entire series in 2008, finishing fourth in points. "They used the move-over flag pretty well and that kept me from having too much trouble with the lapped cars. I did have to use my nose a couple times to move one or two of 'em off the bottom, so I wouldn't have to move out of the low groove. You don't wanna wreck 'em, you just wanna let 'em know you're there."

Everyone definitely knew Knowles was there as he drove his No. 26 to victory lane and jumped to second from fourth in the points chase. Settling for second was the winner's 23-year-old cousin, Jake Knowles of Tyrone, who started third and quickly took the second spot from outside-front row starter Ronny Lee Hollingsworth of Northport, Ala.

"At the start, I saw Tony drive out away from me and I was starting on softer tires than he had on his car, so I knew there probably wasn't gonna be much chance to pass him," the runner-up said. "I figured we'd just ride it out. Sometimes second ain't that bad in those situations."

Fourth-starting Austin Dillon of Welcome, N.C., fought his way to third after losing a spot early while fifth-starting Tommy Kerr of Maryville, Tenn., was fourth and grabbed the series points lead. Jonathan Davenport of Blairsville, Ga., was fifth, one spot better than the fading Hollingsworth.

"It's just my third time in this car and we've got some work to do on it," Hollingsworth said. "On the start it was just so hard to get back to the bottom. Everyone wanted to go down there, and I was on the outside and just got shuffled back. Starting on the outside definitely hurt our chances."

With four series races remaining at Tennessee tracks over the next five nights, a tight battle for the $5,353 championship has developed with Kerr on top with 830 points. Tony Knowles (818) moved up to second while Davenport (810) retained the third spot.

Jeff Cooke of Spartanburg, S.C., fifth in the series with 788 points, tangled with a lapped car and finished 13th.

Notes: Tony Knowles drives a Rocket Chassis with a Custom Race Engine and sponsorship from SAE Parts, RSD Enterprises, All Star Graphix and Aquatic Solutions. ... He has three victories overall in 2009, including a win on the Bama Super Series at Moulton Speedway and a regular-season victory at Dixie Speedway in Woodstock, Ga. ... At Fort Payne, Knowles earned a $100 bonus from Rocket Chassis as the top-finishing driver for the Shinnston, W.Va., chassis manufacturer. ... Knowles is the 19th winner in series history and third first-time winner of this season. ... Only two cautions (one for Jeff Cooke's tangle with a lapped car, one for Dennis Franklin's broken rear end) slowed the race, which lasted about 20 minutes. ... Among the non-racing drivers on hand was Hall of Famer Billy Moyer of Batesville, Ark. ... The 41 entries was the best car count of the 2009 series; several Crate Late Model and Limited Late Model drivers competed at the track that hosts a Limited division weekly. ... Among drivers failing to make the feature: Robert Gant, Jim Gray, Bryan Pritchard and Jeff Smith of Villanow, Ga. ... Next up on the 10-race series over 13 days is Tuesday's stop at Crossville (Tenn.) Raceway, the first of four races at Tennessee tracks.