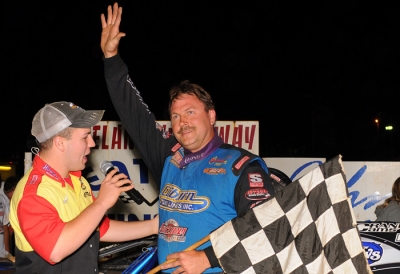 CLEVELAND, Tenn. (July 18) — Winning a thrilling race too close to call from the scoring tower, Clint Smith of Senoia, Ga., nipped Jamie Perry of Ringgold, Ga., at Cleveland Speedway to win the 19th annual Jean Johnson Memorial. Smith, who started 14th and rallied up to fifth after 15 laps, made an outside move on the final lap to win by inches over the low-running Perry, who started seventh and led most of the O'Reilly Southern All Star Series event. | Slideshow

"I noticed they had really slowed down getting in on the bottom, so I felt like if I could get up beside them I could use my momentum to roll on by them and that’s how it worked out," Smith said. "I know that was tough for Jamie."

Smith, a four-time series champion, earned $5,000 for his 10th career series feature victory while Perry just missed his first series victory since 1997 in the dazzling finish. Third-starting Skip Arp of Georgetown, Tenn., was third followed by series points leader Ronny Lee Hollingsworth of Northport, Ala., who started outside the fourth row and was running second on the white-flag lap. Polesitter David Payne of Murphy, N.C., who led early and regained the lead from Perry near the midway point, rounded out the top five.

Smith overcame a sub-par qualifying effort by racing his way into the feature through a consolation race, then he went to work from his eighth-row starting spot. He got up to fifth by a lap-15 caution, fought his way into third on the restart and kept charging toward the front.

Perry, who went back ahead after Payne took over on lap 24, led at the white flag with Hollingsworth in second, but the third-running Smith got to the outside of Perry exiting turn four and barely won the race to the checkers. O'Reilly SAS officials used the line official and a photographer to determine the winner.

The race was slowed by a handful of cautions, including spins by Ethan Hunter (lap 13), Ricky Arms (lap 15) and Bobby Giffin (lap 21). Anthony White's wreck on a lap-21 restart required a red-flag period for cleanup.

Notes: Smith's GRT Race Car is sponsored by J.P Drilling, Cliburn Tank Lines, JFR Graphics and Integra Shocks. ... The event was presented by Tarver Distributing. ... Clint Smith's previoius series victory was at Cherokee Speedway in Gaffney, S.C., in 2007. ... Before checking with the line official and photographs of the finish, the four scorers in the tower were split over who won the race. ... Johnny Chastain pitted during the pace laps and didn't return. ... Jeff Smith of Rocky Face, Ga., won Cleveland's feature for Crate Late Models. ... Cleveland hosts a $3,500-to-win O'Reilly Southern Nationals event on Thursday, July 23. ... Next up for the O'Reilly Southern All Stars is the Mike Head Jr. Memorial on July 25 at Talladega (Ala.) Short Track.