Red-hot Roberts takes Screven for 3rd in a row 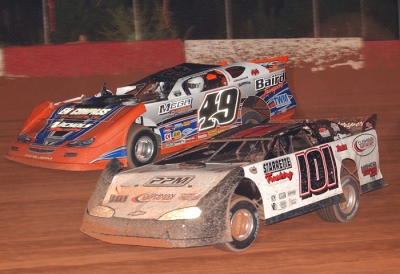 Editor's note: A week after Casey Roberts apparently won at Screven Motor Speedway, series officials stripped him of the victory because he used a tire that was illegally treated. Dennis Franklin was elevated as the winner. The story below doesn't reflect that ruling.

SYLVANIA, Ga. (July 18) — Red-hot Casey Roberts of Toccoa, Ga., earned $5,300 for his victory in the fourth annual Rebel Yell as the O'Reilly Southern Nationals paid a visit to Screven Motor Speedway for the fifth leg of the 10-race series.

Roberts started ninth on a slick track surface and vaulted quickly to the front of the 25-car field, overtaking third-starting Randle Chupp of Troutman, N.C., for the lead en route to his third straight victory in as many nights on the 13-day tour. | Slideshow

"This is unreal ... almost unbelievable," said Roberts, the first driver to win three straight on the series since two-time champ Chris Madden won the first three events in 2007. "It ain't really sunk in yet the kind of weekend we've just had. We're riding a wave that might crash any time, but we're gonna ride it while we can. Racing can be up and down, and right now we've just got it going our way."

Roberts isn't in the points chase after skipping the first two series races in Virginia and North Carolina, but since the tour moved to Georgia, victories at Hartwell Speedway, Swainsboro Raceway and Screven have netted him $14,100.

The feature was plagued by eight cautions, including three yellows before an official lap was complete and a controversial yellow with seven laps remaining. Among the early accidents was a multicar skirmish in turns one and two on the original start that sent Chupp airborne and nearly flipped his car. The car of seventh-starting Jeff Cooke of Spartanburg, S.C., who entered the race leading the series points, was also banged up in the incident but he was able to restart and finish 21st.

The cautions were a factor in Roberts quickly picking his way to the front of the pack. Polesitter Jonathan Davenport of Blairsville, Ga., paced the opening laps, but that was after suffering damage in the first-lap melee. Chupp took control from Davenport but was passed by Roberts, who led the rest of the way.

Tenth-starting Dennis Franklin of Gaffney, S.C., ended up a controversial second after being involved in a late caution while Ben Faircloth of Swainsboro, Ga., Ivedent Lloyd Jr. of Ocala, Fla., and 14th-starting Tommy Kerr of Maryville, Tenn., rounded out the top five. Davenport ended up 15th while Chupp ran out of fuel running second, triggering the late accident that knocked Chesley Dixon of Swainsboro out of a potential second-place finish.

Dixon was upset with ended up 13th after the accident with seven laps remaining. The fuel-less Chupp slowed dramatically in turns three and four, and the third-running Dixon wasn't able to avoid him, spinning in the process while the fourth-running Franklin spun to avoid the mess along with the lapped car of Shon Flanary.

Dixon and Franklin were initially both pointed to the rear for the restart, but Franklin complained to officials and was restored to the second position, where he finished.

"I got in the corner and turned the car around after getting into the back of Chupp," Dixon said. "They told us in the drivers' meeting that if you stopped on the track, you'd have to go to the rear. We both stopped during the accident. I don't know what kinda call that was. ... Franklin got his spot back and I went to the tail."

Franklin said his spin to avoid the wreck meant he wasn't involved. "At first they wanted to put me in the rear for stopping, but I wasn't involved in that wreck and that's what I was telling 'em," he said. "I ran into the corner and they were sideways in front of me, so I spun to keep from hitting 'em. When you're racing for points on the series like we are, I can't just run in there wide open and hit him in the door, and make the next race. I thought they made the right call."

With series promoter Ray Cook away while racing on the Lucas Oil Late Model Dirt Series, Chris Tilley served as race director and made the ruling. "We ruled that Dennis Franklin stopped on the racetrack to avoid the wreck between Chupp and Dixon," he said. "That's the reason we gave him his spot back."