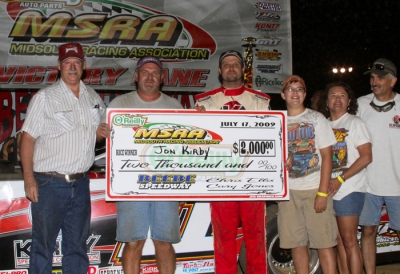 BEEBE, Ark. (July 17) — Cruising to victory for the richest payday of his career, Jon Kirby of Russellville, Ark., earned $2,000 at Beebe Speedway for a flag-to-flag triumph in a caution-free 30-lap feature on the O'Reilly Mid-South Racing Association.

Kirby, who returned to regular Late Model racing in 2007 after taking a break from racing for a few years, started outside the front row and got the jump on polesitter Gary Christian of Broken Bow, Okla., from the outset. Kirby pulled away and built a lead of nearly a half-track margin along with a cushion of several lapped cars in racing to victory over Christian, who dropped to fourth on the fifth lap but was back into second by lap 17.

Notes: Kirby's GRT Race Car has a Kuntz & Co. engine and sponsorship from Kirby Specialties and Doug's Electrical Service. ... Kirby is the seventh series winner in 10 MSRA events in 2009. ... The event drew 24 drivers from five states. ... The event was the second caution-free MSRA feature of the season at Beebe. ... Rookie Austin Rettig of Sikeston, Mo., won the Larry Shaw Race Cars Hard Charger honors for his 20th-to-14th run ... The series continues the weekend with a Saturday event at Drew County Speedway in Monticello, Ark.