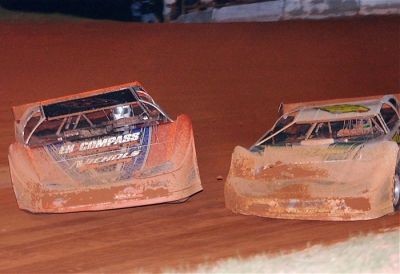 Davenport became the second first-time winner on the series in as many nights as the 10-race tour began to hit its stride following Vic Hill's victory Monday at Wythe (Va.) Raceway.

For Davenport, his victory required handling a rough spot on the track in turns three and four that caused drivers headaches if they hit it wrong as a track where it rained twice while workers prepared the surface.

"It took me some time to learn how to get through there, and that's when they was catching me," said the 25-year-old Davenport, who started outside the front row. "I started slowing down over there to enter the corner without hitting the hole, and I finally figured out a way to do that. When I did hit it, I wanted to make sure to hit it straight and not with the car sideways."

Davenport battled through the race's early stages with polesitter Jeff Smith of Dallas, N.C., fending off several challenges before Smith's car lost power on the 17th lap. Seventh-starting Randle Chupp of Troutman, N.C., moved up to second after Smith's departure, but he never seriously threatened the leader, falling back on restarts. Chupp got rolling in the high groove in the race's late stages but a caution stymied the charge.

Seven cautions in all slowed the race, including on the white-flag lap when Chris Wilson got into the frontstretch wall exiting turn four. With the track blocked on the final lap, the checkered flag was thrown and the race was over.

Chupp settled for second with inaugural series winner Jeff Cooke of Spartanburg, S.C., third. Tony Knowles of Tyrone, Ga., and 12th-starting Dane Dacus of Arlington, Tenn., rounded out the top five finishers in front of a nearly-packed house at the track just west of Charlotte.

"That was a roller-coaster ride right there," Cooke said following the feature. "I knew we had a good car. It was just keeping it together for 35 laps. I knew the attrition rate was going to be very high as rough as the track was."