Gentry rallies from the back at Duck River 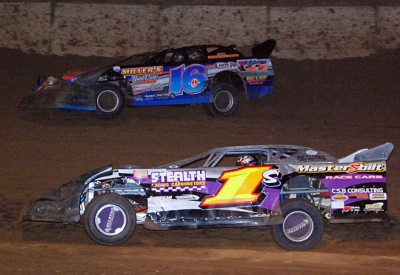 WHEEL, Tenn. (July 11) — Starting on the rear after going to a backup car, David Gentry of Lewisburg, Tenn., drove the Stealth Carburetor's house car to victory at Duck River Speedway for his second Southern Regional Racing Series victory of the season. The 20th-starting Gentry earned $3,000 for the victory at his home track.

Daniel Miller of Shelbyville, Tenn., was second followed by 13th-starting Jay Brinkley of Raus, Tenn. Polesitter Anthony Burroughs of Muscle Shoals, Ala., and Brandon King of Decatur, Ala., rounded out the top five.

Burroughs lead early with Corey Posey and Josh Putnam in pursuits. After several troubled double-file restarts — which the series has decided to scrap — Putnam was out front with Miller in second. In battling Miller for the lead, Putnam got into the frontstretch wall, but Miller was able to continue. Gentry worked his way around Miller for the lead and the victory.