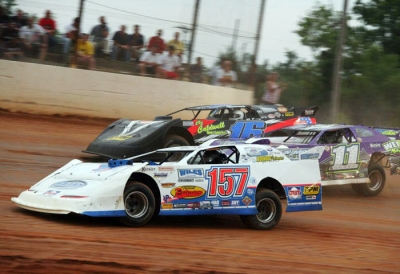 JUNCTION CITY, Ky. (July 10) — Former series champion Mike Marlar of Winfield, Tenn., overtook David Webb of Nicholasville, Ky., on the eight of 40 laps and led the rest of the 14th annual Pete Abell Memorial at Ponderosa Speedway for his second O'Reilly Auto Parts Battle of the Bluegrass DirtCar Series victory of the season.

Marlar, running fourth at the outset of the race, moved up to take command exiting turn two and went on to his series-leading 15th career O'Reilly BoB victory. He pocketed $3,000.

Webb couldn't summon a challenge following the last of three cautions on the 34th lap and settled for second with fast qualifier Eddie Carrier Jr. of Salt Rock, W.Va., in third. Mike Jewell of Scottsburg, Ind., was fourth and Justin Rattliff of Campbellsville, Ky., lost two spots in the closing laps to finish fifth. Dustin Neat of Dunnville, Ky., was running third when he departed on the 21st lap with suspension damage after contact with Rattliff.

The most serious of three cautions was for a lap-14 tangle between Eric Wells and Jimmy Crabtree on the backstretch. When tempers flared among crew members in the hot pit area under the caution, officials disqualified Crabtree and parked Wells for the night. The other yellows appeared for Neat slowing midway through the race and for a spin by Buzz Williams on lap 34.