After wild finish and DQ, Allen wins at Fayetteville 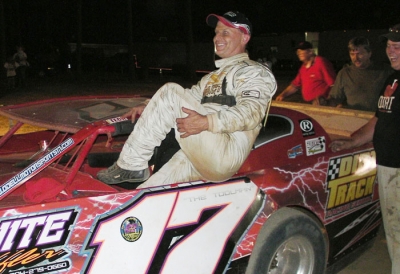 FAYETTEVILLE, N.C. (July 4) — Three drivers led the Carolina Clash Super Late Model Series event on the Fourth of July at Fayetteville Motor Speedway, but none of them won the race. Tim Allen of Kannapolis, N.C., inherited the 50-lap victory when Doug Sanders was disqualified for weighing in light after a wild finish at the 4/10-mile oval.

The off-track decision that determined Allen's victory wasn't as exciting as the on-track fireworks, but Allen took the $5,000 and his third career series victory anyway.

“I had already weighed and just about got across the track and (series officials) told me Doug was light. We were way heavy,” said Allen, who recovered from a lap-26 spin that included two other cars. “I hate to win them like this, but you have to take them any way you can get them.”

Allen's victory is his second in the last three Carolina Clash races following his June 13 victory at Friendship Motor Speedway in Elkin, N.C.

For most of the race, it appeared five-time series champion Ricky Weeks of Rutherfordton, N.C., would be in victory lane. He blew out both right-side tires on the 39th lap after hitting something on the track, handing the lead to series points leader Jeff Smith of Dallas, N.C.

But Smith blew a right rear tire taking the white flag, and as Sanders tried to go by in turn one, the cars collided with the Sanders' rear tires coming completely off the ground. Sanders, of Springwood, N.C., collected his car and won the race to the checkered flag, but he was stripped of the victory after weighing in 8 pounds below the 2,250-pound minimum.

With everyone moving up one spot in the running order, hometown driver Scott Autry finished second followed by Shawn Beasley, Smith and Mike Mason.

Fast qualifier and polesitter Benji Cole of Canon, Ga., driving the Jack Starrette-owned No. 22, fell behind Beasley at the outset and got tangled up in a lap-five crash that tore up the driver's side of the car and broke a right-front tie rod.

Notes: Allen's GRT Race Car is sponsored by Granite Muffler. ... Allen was coming off a Friday night victory at Carolina Speedway near Gastonia that helped finance his trip to Fayetteville. ... Allen was caught up in Dennis "Rambo" Franklin's lap-26 spin along with Dan Breuer. Franklin was driving the Kelly Hamrick-owned No. 97 Bloomquist Race Car. ... Jeff Smith's last-lap flat tire was a reversal of fortune. Smith won April's World of Outlaws Late Model Series event at Fayetteville when Vic Coffey had a flat tire heading for the white flag. ... The event was the 35th series race at Fayetteville and 189th series event overall. ... The only drivers failing to make the feature lineup were Johnny Gregory and Ross Bailes. ... Next up for Carolina Clash competitors is a July 11 event at 311 Fastrack in Madison, N.C., paying $5,000 to the winner.