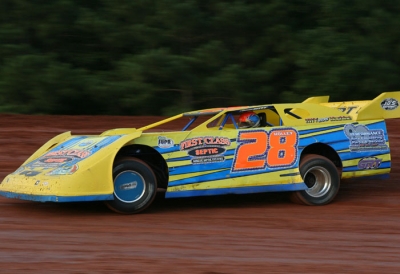 Chris Holley tunes up his No. 28 at Champion Park. (scottscustomart.com)

Minden, La., drivers Jeff Chanler and Kyle Cummings finished third and fourth with fifth-row starter Lee Davis of Greenwood, La., rounding out the top five in a race with as many fireworks on the track as during the Fourth of July intermission.

Kenny Merchant of West Monroe, La., led the first six laps before series points leader Kevin Sitton of Baytown, Texas, took over. Sitton had a scrape passing the lapped car of Jerry Russell on the 21st lap, then a lap-22 caution set up a side-by-side duel with Merchant taking command.

The battle continued with a Merchant-Sitton tangle on the 34th lap when Sitton tried to get under the leader in turn three. The entangled cars required track crews to separate them during the caution period while Holley inherited the lead and rolled to victory. Merchant ended up eighth and Sitton was 10th.

Notes: Holley's GRT Race Car is sponsored by First Class Septic, Performance Race Engineering Parts & Service, Highway 105 Machine and J.D.'s Body Works. ... Holley's best previous SUPR finish this year was sixth at Lone Star Speedway in Kilgore, Texas, on May 24. ... Holley ran regularly in Houston Raceway Park's Crate Late Model division the first half of 2009, winning three times. ... He won a modified feature at HRP last November. ... The checkered flag waved on the 45-minute race at 11:50 p.m. ... Allen Tippen of Minden, La., moved back to second in series points with his 21st-to-sixth run. He had to start last in the feature after losing a fuel pump belt during his heat race. ... Local favorite Kyle Cummings had a scare in his heat race when his machine caught on fire near the fuel cell, drawing a lap-four caution. Cummings completed nearly two more laps before track officials could throw the yellow and pull him over on the frontstretch to extinguish the blaze. An unseated or faulty fuel cap was to blame for the fire, but Cummings was allowed to continue. He was also fortunate in the feature, overcoming a lap-12 spin to rally back to fourth. ... Jody Prince of Sibley, La., started 19th and finished ninth in the feature. ... Jon Mitchell of Nash, Texas, disputed a black flag near the halfway point and he wasn't scored by officials the rest of the way. He ended up 19th. ... SUPR competitors return to pavement for a second time in 2009 with a 50-lap feature on July 11 at Monroe (La.) Motor Speedway, a 3/8-mile concrete oval.