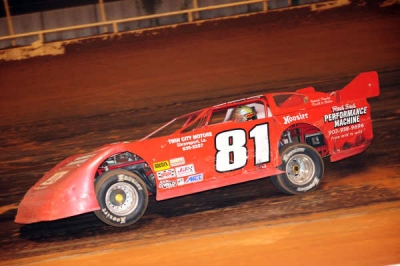 KILGORE, Texas (July 3) — Winning on the O'Reilly Southern United Professional Racing tour for the first time since 2000, polesitter Ricky Ingalls of nearby Longview earned $2,500 for his flag-to-flag victory at the half-mile oval.

The 1996 SUPR champion won the 40-lap feature by a full second over another member of the famous Texas racing clan, Jason, for his 18th career series victory. Ricky Ingalls hadn't won on the SUPR circuit since an August 2000 victory at the same track.

On a night that saw most racers stick with the low groove, Rob Litton of Alexandria, La., finished third, with Ronny Adams of Greenwood, La. and Texan Jon Mitchell of Nash rounding out the top five. Reigning series champion Kenny Merchant of West Monroe, La. was the hard charger with his 14th-to sixth run that moved him into second in series points behind Kevin Sitton of Baytown, Texas, who finished seventh at Lone Star.

Sitton was battling for third late in the race when he briefly lost control in turn two and lost three positions.

The race was slowed by four yellow flags, the first on lap 8 for a spin by Skip O'Neal of Midlothian, Texas. After the restart, Ricky Ingalls marched to a three-second lead on the field before a lap-17 yellow for Jeff Chanler of Minden, La., who slowed on the backstretch and rolled to the infield pits.

A five-car pileup in turn three on the ensuing restart brought out another caution, knocking out previous Lone Star SUPR winner Chris Brown of Spring, Texas, as his car was sandwiched against the wall along with Gary Christian of Broken Bow, Okla. Chris Holley of Dayton, Texas, Trey Beene of Bossier City, La., and Merchant were also involved with Beene and Brown done the night.

Michael Coleman of Tyler, Texas, slowed on the 30th lap for the final caution in a race where 12 of 20 starters were running at the finish.