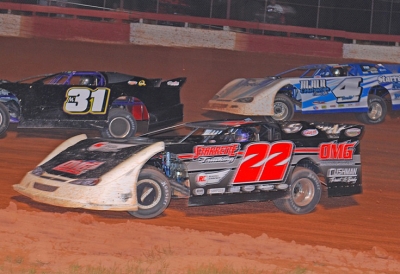 SYLVANIA, Ga. (June 27) — Outside front-row starter Benji Cole of Canon, Ga., fought off repeated challenges from polesitter Ed Basey of Evans, Ga., at Screven Motor Speedway for his second O'Reilly Southern All Star victory of the year and third of his career.

Cole and Basey were side-by-side in the final laps, touching once in turn four before Cole turned back Basey's final charge. Cole earned $5,000 while Basey got second after surviving a late spin in turn three because a caution had already appeared for fluids on the track surface.

Randy Weaver of Crossville, Tenn., who started 13th, was third in a race slowed by several cautions. Brothers Ben Faircloth and Jeremy Faircloth of Swainsboro, Ga., rounded out the top five in a race where a dozen or fewer cars were running at the finish.

Notes: Cole's previous series victory of 2009 came April 18 at Toccoa (Ga.) Speedway. ... The Southern All Stars added another $5,000-to-win event at Screven set for Nov. 13. That'll be the opener of a three-race weekend with a Nov. 14 race at Fayetteville (N.C.) Motor Speedway and Nov. 15 at Cherokee Speedway in Gaffney, S.C. ... Next up for the series is a July 17-18 weekend at two Monty Morrow-promoted ovals, North Georgia Speedway in Chatsworth and Cleveland (Tenn.) Speedway.