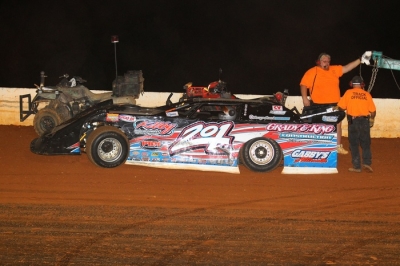 RINGGOLD, Ga. (June 26) — With two leaders falling by the wayside, Randy Weaver of Crossville, Tenn., was out front when it counted at Boyd's Speedway for his second Tennessee Thunder DirtCar Series victory of the season. Weaver, guesting in the Bob Harris-owned No B1, earned $3,000 for the victory. | Slideshow

Fast qualifier Billy Ogle Jr. of Knoxville, Tenn., started on the pole and led 26 laps before he lost a wheel with broken left rear hub, sending the wheel across the track in turn four and ending his race prematurely. Weaver, who had overtaken Tommy Kerr of Maryville, Tenn., four laps earlier, inherited the lead.

With Kerr contesting Weaver's position on lap 40, 22nd-starting Mike Marlar of Winfield, Tenn., flew into the mix, passing both drivers to grab the lead backstretch to take command. During the three-car battle for the lead, Kerr slammed Marlar from behind, spinning him out of contention. Kerr was sent to the tail for rough driving, handing the lead back to Weaver. Marlar was sent to the rear by series officials and elected to take his car to the pits.

Weaver led the rest of the way for the victory while 20th-starting Anthony White of Clinton, Tenn., rallied to finish second ahead of Knoxville's Mark Vineyard. Hometown youngster Cody Barnett was fourth followed by 14th-starting Jake Knowles of Tyrone, Ga.