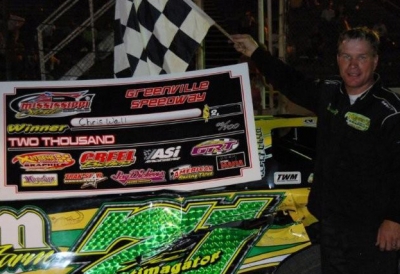 GREENVILLE, Miss. (June 19) — Going to the lead with a dramatic three-wide pass on the 18th lap, fifth-starting Chris Wall of Holden, La., led the rest of the 40-lapper at Greenville Speedway for his fourth Mississippi State Championship Series victory of the season. Wall took the checkered flag ahead of Chad Thrash of Meridian, Miss., for the $2,500 victory.

Thrash got the runner-up spot despite a lap-12 spin that dropped him from third to seventh without the caution flag showing. Polesitter Scott Slay of Clinton, Miss., settled for third with hometown driver Greg Fore and Scott Creel of Franklinton, La., rounding out the top five.

Several frontrunning drivers weren't around at the finish. Bub McCool of Vicksburg, Miss., started outside the front row and led the first eight laps, but he broke a left-rear wheel and retired on the 11th lap. David Ashley led laps 9-17 but a flat right-rear tire knocked him from contention and he pulled out on lap 24.

Clay Fisher, who started 13th, was running fourth at the white flag but lost a driveshaft in turn two. He collected the fifth-running Jeremy Broadus and both dropped out of the top 10.

Notes: Wall's MasterSbilt Race Car has a Wall 2 Wall Performance Engine and sponsorship from C&M Gator Farm, Gator Trax Boats and Stuckey Enterprises. ... Wall is the career leader in MSCC victories with 29. ... The series completes the weekend with an event Saturday at Jackson (Miss.) Motor Speedway.