From series and panhandleracing.com reports 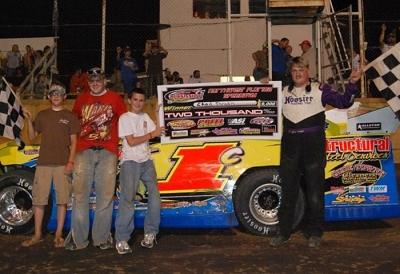 Chad Thrash picked up his second victory of 2009. (Tammy Davis)

BLACKMAN, Fla. (June 11) — Chad Thrash of Meridian, Miss., moved into the Mississippi State Championship Challenge points lead with a 40-lap victory at Northwest Florida Speedway. The fourth-starting Thrash, who entered the race 10 points behind leader Neil Baggett in MSCC points, earned $2,000 for his second victory of the season by overtaking Shep Lucas of McKenzie, Ala., in the final two laps.

The polesitting Lucas settled for second with Steve Bryan of Collinsville, Miss., in third. Stephen Brantley of Monroeville, Ala., and Keith Miller of Sumrall, Miss., rounded out the top five. Scott Slay of Clinton, Miss., took the lead from Lucas early in the race but dropped out with mechanical problems while leading on the 17th lap.

The series completes a swing through Florida with a $2,000-to-win event Saturday at Southern Raceway near Milton.