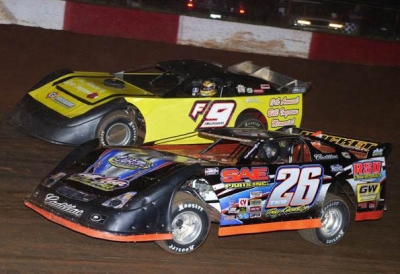 WOODSTOCK, Ga. (June 6) — Hometown driver Frank Ingram has had his share of near-misses in the previous 10 runnings of the Bill Ingram Memorial at Dixie Speedway, including a second-place finish in the first event in 1999 when he led much of the race before losing to Skip Arp. | Slideshow

But the 34-year-old Ingram figured his time would eventually come in the special event that honors the inaugural winner of the Dixie Shootout, who died in 1999 after a battle with cancer.

"I always said I wasn't going to win it until I deserved it," Ingram said. "That's the way he'd have wanted it."

Dad definitely would've been proud of son Frank on Saturday at Dixie as he worked the outside groove throughout the race, finally grabbing the lead from polesitter Tony Knowles of Tyrone, Ga., on the 36th of 50 laps and winning the race to the checkered flag in the 11th annual event at the 3/8-mile oval north of Atlanta.

"The very first they had that paid $10,000 back in '99, everybody stopped in for that race," Frank Ingram recalled in a Monday phone interview. "Me and (Scott) Bloomquist started on the front row of the feature and I led the feature probably 35 or 50 laps, and Skip Arp came up and passed us both. I almost won that first one, and I've had second place two or three times. This past Saturday was the first time I've won it."

Knowles, the fastest among 28 qualifiers, and his cousin Jody Knowles started on the front row for the 50-lapper, but it was Tony out front early when Jody spun in turn two on the second lap. A backstretch scramble on the restart triggered by Tim Day's spin collected several cars and drew a red-flag period; Wayne Echols and Richard Yeoman were both done for the night.

The race finally got rolling thereafter with Tony Knowles leading Ricky Williams and Mike Head while Ingram raced toward from his sixth starting spot. Ingram found himself in side-by-side battles working to the front as his Rayburn Race Car's handling improve as the outside groove cleaned off throughout the race.

"I was about the only person on the outside," said Ingram, who made just his second Super Late Model start of 2009. "With that car, you've gotta keep your momentum up, so the outside was a little better for my car."

Ingram dispatched of Williams and then Head, taking the second spot on lap 30. After a brief caution for Dusty Chitwood's spin, Ingram battled for the lead with Knowles, taking command on lap 36 for a lead he'd never give up. In victory lane, he picked up the trophy bearing his father's name for the first time, along with a $5,000 check.

The only disappointment? Ingram uses an in-camera car so he can watch the race later, but he only has a few laps of this one recorded.

"I didn't get to see none of the exciting parts," Ingram said. "I turned it off during the red flag and never turned it back on."