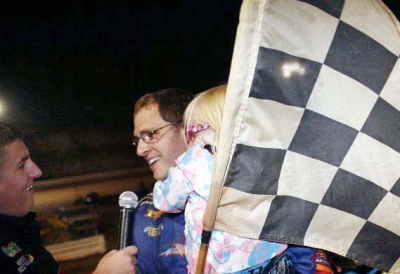 SITKA, Ky. (June 6) — Josh McGuire of Grayson, Ky., survived a late-race stretch of caution flags at 201 Speedway to complete a flag-to-flag victory, the third of his career on the O'Reilly Battle of the Bluegrass DirtCar Series. McGuire earned $3,000.

From the drop of the green flag it appeared to be McGuire’s race to lose as he jumped to the high side with Terry Hicks, Aaron Hatton and series points leader Victor Lee in hot pursuit. Rod Evans tried to take third from Hatton on the seventh lap, but spun in turn four to draw a caution.

By the 10th circuit, Lee was up to third behind Hicks, and he took the runner-up spot on the 15th lap as the frontrunners maneuvered through heavy lapped traffic. Lee inched closer to McGuire's car in the 40-lap race's late stages, with the leaders nearly making contact exiting turn four on the 35th lap before a caution waved for Jamie Ferguson's spin.

Failed restarts delayed the ending of the event for a total of five cautions between laps 35-37, but McGuire held on to the finish for his first series victory since May 3, 2008, at Richmond (Ky.) Raceway. Lee, Chris Combs, Hicks and Paul Harris rounded out the top five. Dustin Linville of Lancaster, Ky., actually crossed the finish line third, but he failed to make weight in the postrace check at the scales.

Notes: McGuire's Rayburn Race Car has a GCP Engine and sponsorship from Owens Pipeline Services, D.J.'s Kitchen Corner and K&E Trucking. ... The victory was his second of the weekend as McGuire won a regular-season event Friday at Skyline Speedway in Stewart, Ohio. ... Next weekend the series heads to Ponderosa Speedway in Junction City, Ky., and Bluegrass Speedway in Bardstown, Ky., for a pair of $3,000-to-win events June 12-13.