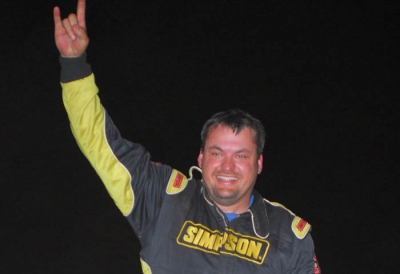 "Man, we went harder on tires and Skip really opened up during the middle stages of the race," Weaver said. "But during those last few cautions my crew kept telling to stay up on the wheel because we were faster on the stopwatch. And when our tires finally fired man we just came to life.

"I am just glad I was able to do my part and get these guys another win. I need to thank Mike Hill and all the guys for giving me such a great car."

Arp settled for second with Joe Armes of Petros, Tenn., in third. Hall of Famer Freddy Smith of Seymour, Tenn., and hometown driver David Crabtree rounded out the top five in race slowed by three cautions for minor incidents. Hill, Weaver's teammate and car owner, was running among the top five when he cut down a right rear tire in the race's closing moments, finishing 10th at the 4/10-mile oval.