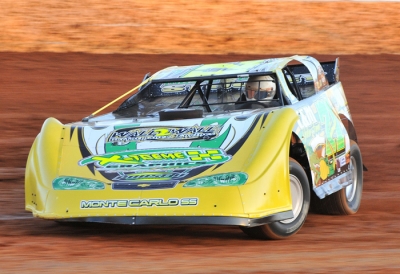 Chris Wall tunes up before his third MSCC victory. (theinfieldidiot.smugmug.com)

Thrash made several attempts to get alongside wall, but eventually settled for second while Mike Boland of Cuba, Ala., rallied to finish third. David Ashley of Zachary, La., and Brian Rickman of Columbus, Miss., rounded out the top five.

Notes: Wall's MasterSbilt Race Car has a Wall 2 Wall Performance Engine and sponsorship from C&M Gator Farm, Gator Trax Boats and Stuckey Enterprises. ... Wall's previous 2009 MSCC victories came at South Mississippi Speedway near Pass Christian. ... Lucky Keeton and Jim McDuffie won NeSmith Chevrolet-sanctioned weekly features for Crate Late Models, one of them a makeup from a rainout earlier in the month. ... A few drivers were injured during the night's action. Randy Boyd Thompson suffered a left rotator cuff injury in a three-car crash during the main event and was taken to a local hospital ... In the Crrate division, Tody Ratcliff suffered a foot injury in a multicar pileup on the backstretch and was also taken to the hospital. ... Keith House's Late Model flipped in turn one during an MSCC consolation race, but he wasn't injured. ... Whynot is dark the first weekend in June with Magnolia Motor Speedway near Columbus, Miss., hosting the Governor's Cup on June 6, which features a $5,000-to-win Super Late Model feature. ... Next up for MSCC competitors is a June 12 event at Northwest Florida Speedway in Blackman, Fla., the first-ever visit to the track.