Madden rallies from 16th to win at Cherokee 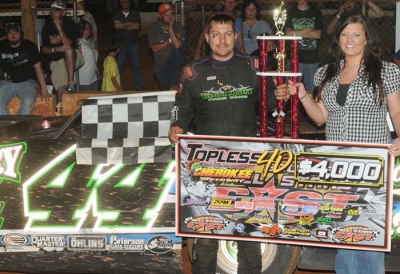 GAFFNEY, S.C (May 30) — Rebounding from a qualifying wreck caused by brake failure, Chris Madden of Gray Court, S.C., rallied from 16th at Cherokee Speedway for his second O'Reilly Southern All Star East victory of the season. Madden was up to third by the 14th lap, then tracked down polesitter and race-long leader Jeff Cooke of Spartanburg, S.C., to take the lead and pull away for the $4,000 victory, his series-leading 15th career victory.

Cooke, who suffered damage to the front of his car in a turn-four tangle early in the race, settled for second with outside front-row starter Furman Parton of Union, Mills., N.C., in third. Reigning series champion Casey Roberts of Toccoa, Ga., who started in the last of nine rows after weighing in too light following time trials, rallied to finish fourth. Johnny Pursley of Clover, S.C., started fourth and ran second most of the way, but a flat tire with seven laps remaining knocked him from contention and he raced back to finish fifth.

Notes: Madden drives a Clements-powered Bloomquist Race Car with sponsorship from Century Plastics, Cushman Paint & Body and Freeman Plumbing. ... SAS East competitors ran roofless at Cherokee and the previous night at Union County Speedway in Buffalo, S.C. ... The most serious wreck was a five-car tangle on the 14th lap that included Jonathan Davenport, Ross Bailes, Casey Roberts, Zach Cox and Monk Gulledge; it required a red-flag cleanup. ... Next up for the SAS East is the 29th annual Laurens County Shrine Race on Tuesday, June 9, at Laurens County (S.C.) Speedway. The event pays $3,000 to the winner.