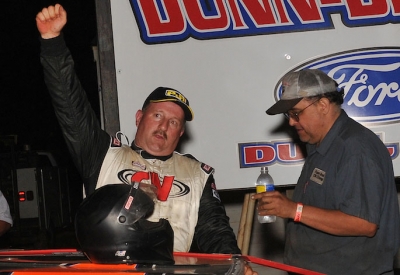 FAYETTEVILLE, N.C. (May 30) — Five-time and reigning series champion Ricky Weeks of Rutherfordton, N.C., started on the pole and led all 40 laps at Fayetteville Motor Speedway for his first victory of the season. His series-leading 29th career victory paid $4,000 at the 4/10-mile oval as he won by a three-second margin. | Slideshow

We've got our backs against the wall," Weeks said, chronicling a tough season so far. "We ain't got no money, we spent a bunch of money on a motor and it blowed and it got us in a hole. We're having to dig out, but we're digging. We broke the rear end at Hartwell — that was $5,000 we were gonna win. The night that motor blowed, we were gonna win that race. But that's racing. Unfortunately our billfold ain't deep enough to stand a lot of bad luck because the economy's bad and the sponsors have tightened up."

Series points leader Jeff Smith of Dallas, N.C., finished second followed by Dennis Franklin of Gaffney, S.C. Shawn Beasley of Lumber Bridge, N.C., and Dan Breuer of Troutman, N.C., rounded out the top five finishers. Smith spun in turn four while trying to lap Chris Meadows, but he was returned to the second spot because the caution flag was waving simultaneously for a slowing Noel Tucker on the backstretch.

Notes: The 49-year-old Weeks drives a Rocket Chassis sponsored by Starrette Trucking, Parton Lumber, AFCO and VP Racing. ... The victory was his second overall in 2009; he earned $2,000 for an unsanctioned event at Friendship Motor Speedway in Elkin, N.C., on April 18. ... His previous Carolina Clash victory came Sept. 20, 2008, at Lancaster (N.C.) Motor Speedway. ... D.J. Tyndall scratched from the feature lineup. ... Next up for Clash competitors is a June 13 event at Friendship paying $4,000 to the winner.