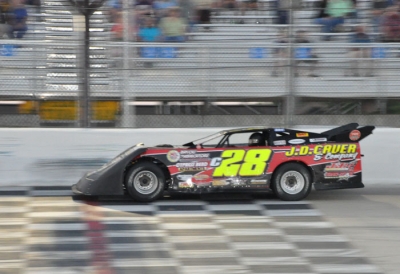 MONROE, La. (May 29) — Two-time series champion Kenny Merchant of West Monroe, La., led all 50 laps at Monroe Motor Speedway to win the first-ever event on a paved oval for the O'Reilly Southern United Professional Racing tour. Merchant, who started outside the front row, earned $2,500 for his second SUPR victory of the year and series-leading 46th of his career. | SUPR schedule/results

Donald Watson of Greenwell Springs, La., was five lengths back in second with 10th-starting David Ashley of Zachary, La., third on the concrete surface. Jimmy Gaylor of Columbia, La., and polesitter Jody Mayne of Grand Saline, Texas, rounded out the top five at the multimillion-dollar 3/8-mile track.

At the drop of the green, Merchant got the jump on Mayne with the third-starting Watson quickly dropping Mayne to third. The 16 starters strung out mostly single file until Merchant entered lapped traffic on the 13th circuit, and by then, seventh-starting Bub McCool of Vicksburg, Miss., was making a move.

McCool reached third place by the 20th lap and raced Watson side-by-side before taking second on lap 28. McCool continued his charge and began to challenge Merchant high and low before blowing a tire in turn two on the 31st lap. McCool suffered some right rear damage and brought out the first caution, but he pitted for fresh rubber and returned.

With Merchant holding the lead, Watson and Ashley battled for second in the final laps with Watson maintaining the spot. A lap-38 caution for Nicholas Brown's turn-four spin was the second and final yellow of the race.

Notes: Merchant is sponsored by J.D. Caver Co. and Bayou Fabricators. ... In timed hot laps, Merchant posted a 13.92-second lap (98 mph). In an earlier practice, the Dirt Late Models were clocked doing 104 mph on the backstretch. ... SUPR held a March 15 tire test using Merchant's car to evaluate tire blistering and wear for the event. ... Merchant occasionally runs an ASA-legal pavement Late Model at MMS. ... The event, twice postponed by rain earlier this season, was part of the Battle in the Bayou at Monroe Motor Speedway and included 79 cars in four divisions (bandoleros, thunder stocks and legends joined the SUPR entrants). ... Alex Ashley of Zachary, La. and teenage son of three-time SUPR champion David Ashley, blew an engine in hot laps. ... The 50-lap feature lasted 26 minutes with the checkered flag falling at 11:08 p.m. ... Fourteen of 16 starters finished on the lead lap with Richard Guidry one lap down and Jeff Chanler three laps down. ... Monroe's race was a double-points events for SUPR. ... It's back to dirt ovals next for SUPR competitors with a June 13 event at Greenville (Miss.) Speedway.