Lee fends off Marlar, pulls away at Richmond 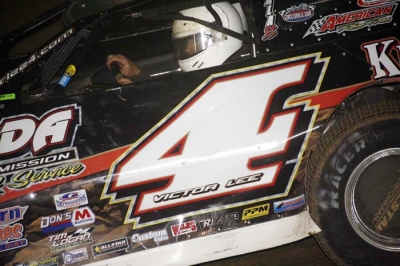 RICHMOND, Ky. (May 29) — Polesitter Victor Lee of Stanford, Ky., withstood challenges from Mike Marlar of Winfield, Tenn., then pulled away in the late stages for a flag-to-flag 40-lap O'Reilly Battle of the Bluegrass DirtCar Series victory at Richmond Raceway. The points-leading Lee's second victory of the season and ninth of his career paid $3,000 in a race twice postponed by rain earlier in the season.

Marlar, up to second early when fast qualifier Eric Wells of Hazard, Ky., got into the turn-three wall on the first lap, stalked Lee through the first 14 laps before the race's lone caution appeared for as Bobby Wolter Jr. slowed on the backchute. Marlar resumed his chase as the top two cars pulled away from the field through the middle stages. With the frontrunners battling lapped traffic on lap 28, Marlar's engine began misfiring and Lee began to stretch his lead

With Lee out of touch up front, eventually winning by nearly a full straightaway, Dustin Linville of Lancaster, Ky., took second on the 36th lap and got the runner-up spot over Tyrel Todd of Science Hill, Ky., and Michael Chilton of Harrodsburg, Ky. Marlar faded to a fifth-place finish, just nipping Chris Combs of Isom, Ky., at the line. Wells ended up 20th while Dustin Neat of Dunnville, Ky., made a 17th-to-seventh charge to grab PPM Racing Products Hard Charger honors.