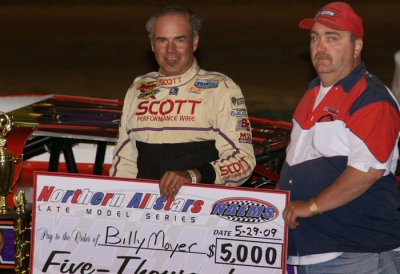 Billy Moyer picks up his winnings at PIR. (kohlsracingphotos.com)

PADUCAH, Ky. (May 29) — Dominating at Paducah International Raceway, Hall of Famer Billy Moyer of Batesville, Ark., couldn't be touched at the 3/8-mile oval en route to a $5,000 victory in the Northern Allstars-sanctioned Tri-Track Challenge opener. | Slideshow

No one could keep up with the red-and-yellow No. 21 as Moyer started outside the front row and pulled away from the outset in the caution-free 40-lapper. He led by a half-track margin after 26 laps. Eighth-starting Bill Frye of Greenbrier, Ark., finished a distant second with 14th-starting Randy Korte of Highland, Ill., rallying to finish third. Randy Sellars of nearby Mayfield, Ky., started 11th and finished while the track's winningest all-time driver, Terry English of Benton, Ky., rounded out the top five after starting 10th.

Polesitter Shannon Babb of Moweaqua, Ill., couldn't keep up with Moyer in the early laps and was running more than a straightaway behind the leader when he retired on the 21st lap with engine problems. Kevin Cole of Christopher, Ill., started third and held that position early before breaking on the 10th lap and pulling out of the race.