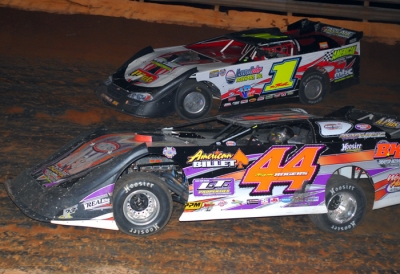 TAZEWELL, Tenn. (May 23) — Stalking polesitter Rick Rogers throughout the 50-lap feature, Vic Hill of Mosheim, Tenn., made his winning move with six laps remaining at Tazewell Speedway for his first career victory on the O'Reilly Battle of the Bluegrass DirtCar Series. Hill earned $4,000. | Slideshow

With 10 laps remaining after the final caution, Hill turned up the heat on Rogers, driving past to take over the point on lap 45. Hill held on for his second east Tennessee victory in as many nights, following up a $3,000 payday at Volunteer Speedway in Bulls Gap. Rogers settled for second while Chad Ogle of Sevierville was third with Tommy Kerr of Maryville and Billy Ogle Jr. of Knoxville giving the Volunteer State a sweep of the top-five spots on the Kentucky-based tour.

Michael Chilton of Harrodsburg, Ky., who earned PPM Racing Products Hard Charger honors with his 23rd-to-seventh run, was the top-finishing series regular. Victor Lee of Stanford, Ky., the two-time Battle of the Bluegrass champion and series points leader, was scheduled to started outside the front row, but mechanical issues forced him out before a lap was completed.

Notes: Hill's GRT Race Car has a Vic Hill Race Engine and sponsorship from Landair Transport, Pilot Travel Centers and Miller Bros. Coal. ... Hill is the 55th winner in series history. ... Brad Hall spun on the initial start. ... Jason Trammell spun for a lap-four caution. ... Shon Flanary ran among the top five early but spun on the sixth lap to draw a caution. ... Danny Yoder's spin brought out a lap-15 caution. ... Jeff Neubert ran among the top five but faded late to finish 12th. ... Rick Rogers lowered the track record with his 11.047-second lap. ... Next up for the series is a May 29 event at Richmond (Ky.) Raceway, a $3,000-to-win race twice postponed because of weather.