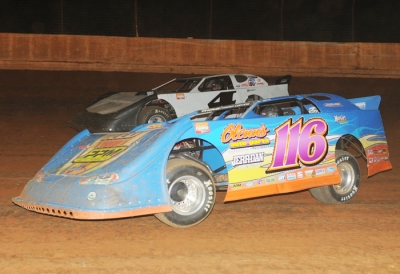 CLEVELAND, Tenn. (May 23) — Fourth-starting Randy Weaver of Crossville, Tenn., overtook polesitter and race-long leader Ricky Arms of Moss, Tenn., on the 21st lap Saturday at Cleveland Speedway and cruised the rest of the way to win the 32nd annual Coca-Cola Tennessee Memorial. The low-running Weaver earned $5,000 for his second O'Reilly Southern All Star Series victory of the season and ninth of his career. | Slideshow

“Man we just had a great race car," Weaver said. "I knew when we went green we had a car that was capable of winning. I just had to bide my time and get through the traffic to get a good run on Ricky."

Notes: Weaver's GRT Race Car has a Race Engine Design powerplant and sponsorship from Glenn’s Auto Parts, Byrd’s Radiator and PPM Racing Products ... Weaver won despite racing with a broken index finger, an injury he suffered the previous night at a racing event at Boyd's Speedway in Ringgold, Ga. ... Eight of the top 10 finishers were home-state drivers. .. His previous series victory came April 3 at North Georgia Speedway which, like Cleveland, is promoted by Monty Morrow. ... The 50-lapper lasted 16 minutes; with rain threatening in the area, officals moved the feature up in the program and the green flag dropped at 9:38 p.m. ... Next up for the series is a June 6 event at Mountain Raceway Park in Maryville, Tenn. The race pays $5,000 to the winner.