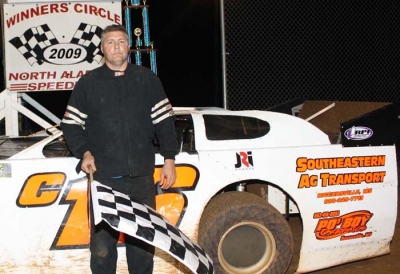 TUSCUMBIA, Ala. (May 15) — Chris Ragan of Corinth, Miss., took the points lead on the first-year Bama Super Series with Friday's $2,000 victory at North Alabama Speedway. Ragan won the third event of the season over Anthony Burroughs of Athens, Ala., on a night when 22 Super Late Models entered the event.

Ronny Lee Hollingsworth of Northport, Ala., was third followed by hometown driver Jamie Flannagan and Tony Knowles of Tyrone, Ga. Jay Brinkley of Shelbyville, Tenn., who entered the event tied for the points lead, was 11th.