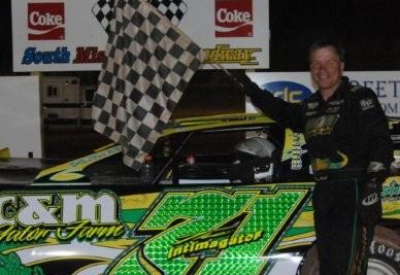 PASS CHRISTIAN, Miss. (May 16) — After dropping back to third place, polesitter Chris Wall of Holden, La., rebounded on the high side at South Mississippi Speedway, then fought off a late challenge by front-row starter Neil Baggett of Shannon, Miss., to earn a $2,500 Mississippi State Championship Challenge victory. Wall, who recorded his sixth career series victory at the Gulf Coast oval over the past past four seasons, also won at South Mississippi in the March 6 MSCC opener.

Baggett was a close second in the 50-lap feature after his late challenge amid lapped traffic while Chad Thrash of Meridian, Miss., the March 7 series winner at the track, was third. Keith Miller of Sumrall, Miss., and 10th-starting Jay Blair of Angie, La., rounded out the top five in an event slowed by several cautions and a red flag.

Notes: Wall's MasterSbilt Race Car has a Wall 2 Wall Performance Engine and sponsorship from C&M Gator Farm, Gator Trax Boats and Stuckey Enterprises. ... Wall, the 2006 series champion, has a series-leading 27 career MSCC victories, 11 more than second-place Mike Boland of Cuba, Ala. ... Wall competed at South Mississippi after a 650-mile journey from Paducah, Ky., where he recorded a fourth-place finish in Lucas Oil Late Model Dirt Series competition. ... Wall ran an open-competition engine at Paducah but switched to a spec-engine package for the MSCC event. ... The 26 Late Models was the largest car count among five divisions. ... Eight drivers completed 50 laps. ... The track's normal NeSmith Chevrolet-sanctioned Late Models took the night off. ... The track is dark on May 23 before returning to regular racing May 30. ... Next up for MSCC competitors is a three-race Memorial Day weekend in Mississippi with races at Greenville Speedway (May 22), Central Mississippi Speedway in Winona (May 23) and Magnolia Motor Speedway in Columbus (May 24).