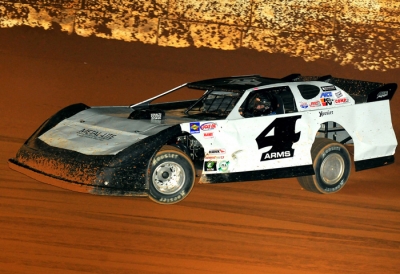 WARTBURG, Tenn. (May 15) — Taking his first Tennessee Thunder DirtCar Series victory since 2006, polesitter Ricky Arms of Moss, Tenn., earned $3,000 by capturing the Spring 40 at Wartburg Speedway. Moss led all 40 laps at the third-mile oval for his second career series victory on a night when rain delayed the program until past midnight. | Slideshow

Billy Ogle Jr. of Knoxville, Tenn., was second with Tommy Kerr of Maryville, Tenn., in third. Mike Marlar of Winfield, Tenn., who won the April 17 series event at Wartburg, was fourth after recovering from a solo spin, and three-time series champion Anthony White of Clinton, Tenn., rounded out the top five.

Notes: Arms is sponsored by Metal-Lite and Hoosier Racing Tire. ... Arms won the night's dash despite a penalty. He was scheduled to start on front-row of the dash but was relegated to the second row along with Billy Ogle Jr. after they twice failed to get the race under way. ... The action-packed dash caused a some car damage and a few bruised egos as Ogle and Anthony White traded paint after the checkered flag fell. ... Cautions slowed the feature on laps 10, 14, 15 and 28. The final caution appeared on lap 38 when Stacy Boles stalled, setting up a two-lap dash to the finish.