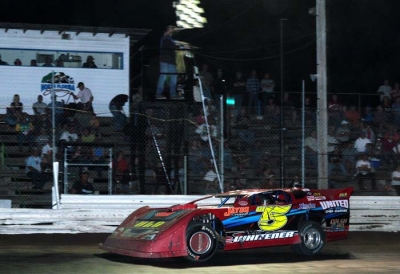 LAKE CITY, Fla. (May 2) — Boosted to the front by the lap-28 misfortune of both front-row starters, Mark Whitener of Middleburg, Fla., inherited the lead at North Florida Speedway and went on to his second straight United Dirt Late Model Challenge Series victory. Whitener earned $3,000 for his third UDLMCS win of the season. | Slideshow

Outside front-row starter Keith Nosbisch of Valrico, Fla., was in control through the first half of the 50-lapper, but he departed on lap 28 with a flat tire. Hometown driver and polesitter Adam Bedenbaugh, who started sixth, was in line to inherit the lead from Nosbisch, but he departed during the lap-28 yellow with damage to his car and a flat right-rear tire.

The seventh-starting Whitener moved from third to first for the restart and stayed in command the rest of the way at the 4/10-mile oval. Fourth-starting John Kellum of Jacksonville, Fla., finished second followed by eighth-starting Dillon Wood of New Smyrna Beach, Fla. Russell Brown Jr. of Valdosta, Ga., was fourth and Jacksonville's Johnny Collins, who rallied after causing a caution, rounded out the top five.

Notes: Whitener's No. 5 is sponsored by Jayco Drywall and United Land Clearing. ... Early leader Keith Nosbisch was lapping competitors after just 11 laps. ... Series points leader Jason Fitzgerald of Jacksonville, Fla., nursed his ailing car home to a sixth-place finish. ... Next up for UDLMCS competitors is a May 15-16 weekend at Oglethorpe Speedway Park near Savannah, Ga., and Screven Motor Speedway in Sylvania, Ga. Both races pay $3,000 to the winner.