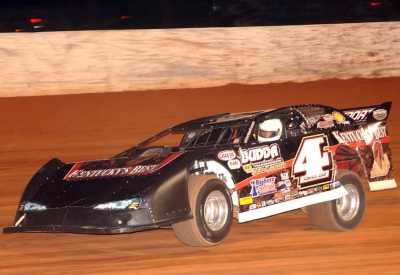 Victor Lee rolls toward his $3,000 victory at Ponderosa. (Brian McLeod)

JUNCTION CITY, Ky. (May 2) — Starting from the pole in the Junebug Rowland Memorial at Ponderosa Speedway, two-time and defending O’Reilly Battle of the Bluegrass DirtCar Series champion Victor Lee led every circuit to claim a $3,000 victory in the annual event at the 3/8-mile oval. | Slideshow

It marked the 10th time in the past 11 years the event has been staged (it wasn’t held in 2002), and the second year in a row that Lee has won the BoB-sanctioned event. The victory in a 40-lapper came on the heels of a disappointing loss to Mike Marlar the previous week in the series opener at Bluegrass Speedway in Bardstown, Ky.

“I felt like I gave one away last week, so this is a whole lot better,” Lee said after driving away from a 22-car field to post the victory. He was never seriously challenged and sped to the honors over ninth-starting Justin Rattliff of Campbellsville, Ky., Brad Neat of Dunnville, Ky., Eric Wells of Hazard and Neat's brother, 12th-starting Dustin Neat of Dunnville.

“It’s always a big advantage when you start out front, but our car was good too,” Lee said. “We had softer tires on the car and I was afraid I might burn ‘em up, but the cautions landed just right and we had one about every time I started to hit lapped traffic.”

That kept Rattliff, who battled fiercely for the second spot with Brad Neat until the race's final caution ended the duel, from potentially mounting a charge amid slower machines. The runnerup finisher did attempt to launch a high-side attack after the race’s last of three caution flags appeared with nine laps remaining, but the right-front fender on Rattliff’s car was flapping from earlier contact with Aaron Hatton during some heated action for second place. The damaged sheet metal affected his car’s aerodynamics and forced Rattliff to the top groove, where his car ran better.

“The track had a couple ruts up there and I couldn’t avoid hitting the rough patches because that’s where my car wanted to run,” Rattliff said. “We had a chance to win the race, but the fender kept me from really driving the car the way I felt I could.”