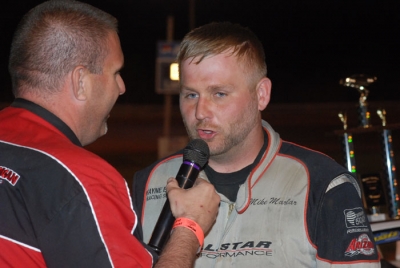 BARDSTOWN, Ky. (April 25) — Like most standout Dirt Late Model racers, Mike Marlar knows that getting around the track as smooth as possible is usually the way to go. But the Winfield, Tenn., driver also knows that adapting to the way a specific chassis works in specific track conditions is key, so he shifted his strategy during the O'Reilly Battle of the Bluegrass DirtCar season opener at Bluegrass Speedway. | Slideshow

"Smooth went out the window about lap 12. Smooth wasn't getting it," Marlar said with a smile. "I just had to do what I had to do. There were some marbles on the track and you'd drive through smooth and hit some marbles and push, so you just had to be aggressive."

Throwing his No. 157 Rocket Chassis into the corners a little harder, Marlar turned up the heat to catch race-long leader Victor Lee of Stanford, Ky., and lead the final 10 laps for his third consecutive victory in the Spring Sizzler.

The showdown between front-row starters and series champions Marlar (2003) and Lee (2007-08) was spiced by tight action on laps 20-21 when Marlar slid under Lee entering turn three, then Lee answered the move by going back ahead exiting turn four. But Marlar's momentum carried him back ahead exiting turn two and he kept Lee at the bay the remainder of the 30-lapper.

"I knew it was going to be about a lap-long battle once I (made a move)," Marlar said. "We've been racing together since '99 or something like that in modified stuff, and he's really a good driver. I really trust him in that situation, and he trusts me. I don't guess we ever touched each other, but it was dang close."

The polesitting Lee wasn't terribly surprised to finish second to Marlar for the third straight Spring Sizzler at Bardstown, but leading 20 laps was an improvement.

"When I got the jump on him there, I thought, 'Well, maybe I can get out front here and ride.' But I knew he'd be right there. He's good here. He always is. He did that slide job, and that's part of racing. I was expecting it sooner than what he did. Mikey's tough, he's a tough racer, and he's good here.

"My dad was showing me signs that he was on me pretty close, and I figured he'd banzai in there. I saw his nose a time or two. Then as soon as he did, I cut back down and got a run on him, but he drove her in there and pulled me off the corner. I couldn't come off (turn) two for nothing, and that's where I think he was killing me at, off of (turn) two."

Lee settled for second at the half-mile oval while Greg Johnson of Bedford, Ind., who briefly took the second spot from Marlar between cautions on lap 12 and 16, was third in the Harrod Brothers-owned No. 71. Dustin Linville of Lancaster, Ky., squeezed past Michael Chilton of Harrodsburg, Ky., in the final two laps for the fourth spot.

Yellow flags waved on lap 12 when D.J. Wells broke and got into the turn-two guardrail, and on lap 16 when Ed Behn and Cody Mahoney tangled in turn four.

Marlar, who notched his series-leading 14th career victory, has won five of the last seven series events at Bardstown and was glad to make more progress in his relative inexperience with the four-bar rear suspension of his Rocket. Lee, who led the series with five victories last season, knew Marlar was just a little better.

"He was a little better and, of course, after he passed me, I kind of got up on the wheel there and ran a little harder," the runner-up said. "When you're out front like that ... you're kind of a sitting duck there. I just tried to run where I felt comfortable, and where I was running was where my car was working the best. ... I just tried to stay smooth and hit my marks, but evidently it wasn't enough."

Notes: Marlar's Rocket Chassis has an Estes Race Engine and sponsorship from Doors-N-More, DWT Racing, G&R Hydraulics, Marlar and Son Auto Dismantling, Performance Battery, Stephens Trucking and Wayne Bowen Racing Supply. ... Marlar was coming off a two-victory weekend April 17-18. He won at Wartburg (Tenn.) Speedway in a race co-sanctioned by the Southern Regional Racing Series and Tennessee Thunder DirtCar Series, and also won a regular-season event at Lake Cumberland Speedway in Burnside, Ky. ... Fifth-place finisher Michael Chilton, 23, is piloting a Brandon Witt-owned car in 2009. ... Jason Keltner was piloting the No. 59 formerly owned by Jeff and Eddie Harrod; Keltner's team bought the car for 2009. ... Kevin Claycomb of Vincennes, Ind., was sixth in a 3-year-old MasterSbilt Race Car, but the team plans to get a brand new MasterSbilt bare frame in a few days and put the car together in the coming weeks. ... Next up for Battle of the Bluegrass competitors is May 1-2 action at Ponderosa Speedway in Junction City, Ky., and Richmond (Ky.) Raceway. Both races pay $3,000 to the winner.