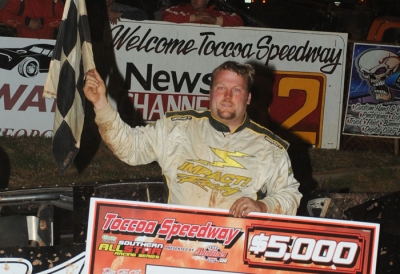 TOCCOA, Ga. (April 18) — Benji Cole of Canon, Ga., overtook new track record-holder Chris Ferguson of Mount Holly, N.C., on the 14th lap, then fought off several challenges for an O'Reilly Southern All Star victory at Toccoa Speedway. Cole earned $5,000 for winning a series event at Toccoa for the second April in a row. | Video highlights | Slideshow

The night started rough for Cole when his car suffered rear suspension damage in time trials, but he made repairs before the main event and topped the field for his second career series victory in a race plagued by 10 cautions and a red flag.

Ronny Lee Hollingsworth of Northport, Ala., was the last of three major challengers in finishing second while David McCoy of Franklin, N.C., finished third. Brent Dixon of Elberton, Ga., and Ferguson rounded out the top five at the quarter-mile oval in northeast Georgia.

Ferguson started on the pole and led Cole early while several early cautions saw the departures of contenders including hometown driver Casey Roberts. When Ferguson slid a little high exiting turn four on the 14th lap, Cole took command. Ferguson fell from second later when he cut down a left-rear tire and spun.

Skip Arp of Georgetown, Tenn., moved up to challenge Cole on a restart, but after a high-side charge, Arp bobbled in turn two, allowing Hollingsworth into the runner-up spot. A flat right-rear tire forced Arp out of the race.

Notes: Cole's DWB Chassis was all-black with no major sponsor decals. ... Chris Ferguson electrified the crowd in time trials by lowering the 6-year-old track record of Casey Roberts by two-tenths of a second. Ferguson was the only driver under the 12-second mark at 11.746. The old mark was 11.986. ... None of the 11 incidents slowing the race were serious. ... Next up for the O'Reilly Southern All Stars is an April 25 event at Talladega Short Track in Eastaboga, Ala., paying $5,000 to the winner. As is customary during NASCAR Nextel Cup weekends in Talladega, the third-mile dirt track will host an unsanctioned event on April 24.