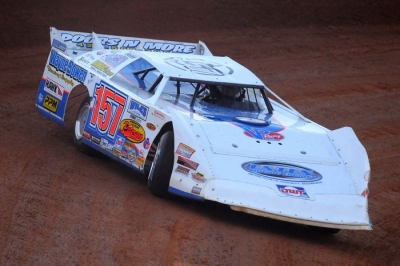 Mike Marlar tunes up before his Wartburg victory. (dt52photos.com)

WARTBURG, Tenn. (April 17) — Eighth-starting Mike Marlar of Winfield, Tenn., led the final 17 laps at Wartburg Speedway for a $3,000 victory co-sanctioned by a pair of Tennessee-based Dirt Late Model series. Marlar, who was up to third after two laps, got the lead from polesitter and race-long leader Tommy Kerr of Maryville, Tenn., on the 24th of 40 laps in the Southern Regional Racing Series and Tennessee Thunder DirtCar Series event. | Slideshow