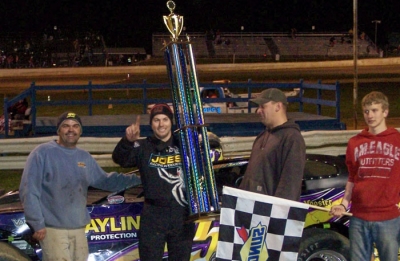 UNION, Ky. (April 11) — A flat tire in his heat race made Jeep Van Wormer's night a tough one at Florence Speedway's Spring 50. But after racing from 14th to win a consolation race, the Pinconning, Mich., driver rallied from his 20th starting position in the main event to a $5,000 victory in Saturday's unsanctioned special. | Postrace notebook | Slideshow

Home-state drivers Steve Francis of Ashland outdueled Darrell Lanigan of Union for the runner-up spot in the 50-lapper. Early race leader Randy Weaver of Crossville, Tenn., was fourth and Josh McGuire of Grayson, Ky., rounded out the top five despite finishing with a broken lower control arm on his No. 41.

Van Wormer won the crowd over with a dazzling 14th-to-first run in the second consolation race. Lining up in the 10th row for the main event, Van Wormer sliced and diced his way to the front, finally overtaking Francis for the lead with 13 laps remaining.

“Man, how about that run! Isn’t that something!” Van Wormer said after the win. “When we had that flat tire in the heat race, I thought we were done. But I kept working and working in the B-Main and I knew I had something.”

Weaver led the first 11 feature laps before Lanigan took command for the next seven laps, withstanding three cautions during his stretch out front. A lap-18 restart allowed Francis to pull even with Lanigan and take the top spot away one circuit later.

Van Wormer’s stunning run started slow as he had difficulty maneuvering through the middle of the pack in the early stages of the race. But by lap 12, he cracked the top 10 and slowly picked away at the rest of the pack.

On lap 20, Van Wormer took third from Weaver and one lap later, he darted past Lanigan to take second and set his sights on Francis. A high-speed game of cat-and-mouse found Van Wormer chasing Francis through lapped traffic until he finally made the winning pass under Francis in turns one and two.

“Once I got going, I knew I had something for them,” Van Wormer said in victory lane. “I have to thank all these guys that work on my car. We wouldn’t be here if it wasn’t for them."