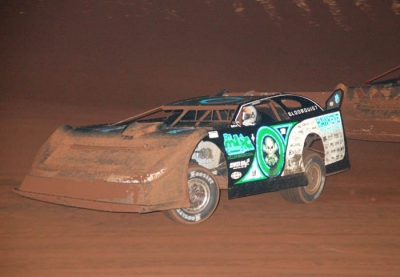 Wall, who picked up $3,000 with a victory in Friday's tuneup feature, settled for second while polesitter Ronny Lee Hollingsworth of Northport, Ala., got a break in finishing third after a mid-race spin. Shane Clanton of Locust Grove, Ga., and Wendell Wallace of Batesville, Ark., rounded out a top five while hometown driver Brian Rickman was the top home-state finisher in sixth.

Front-row starters Wall and Hollingsworth battled the first 20 laps, but Hollingsworth spun to bring out a caution. He was restored to his second spot when officials ruled a lapped car caused the spin. Bloomquist hunted down the frontrunners thereafter, grabbing the lead with 12 laps remaining in the 50-lap main event.