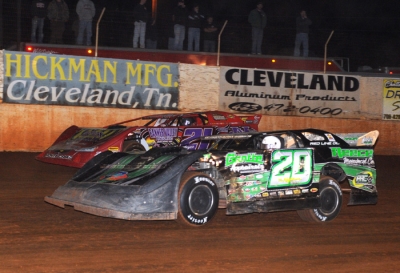 CLEVELAND, Tenn. (April 4) — Fighting back after twice losing the lead, polesitter Billy Moyer of Batesville, Ark., captured the Shamrock 50 at Cleveland Speedway for a $5,000 payday. Moyer's victory was his first at Cleveland and first on the O'Reilly Southern All Star Series since the 1996 edition of the St. Patrick's Day Classic, delayed this year by rain. | Video | Slideshow

Moyer, running at Cleveland along with several other Lucas Oil Late Model Dirt Series regulars because of a race cancellation in Swainsboro, Ga., led the early laps but soon lost the point to Jimmy Owens of Newport, Tenn. Moyer regained the lead two laps later, and Owens spun trying to answer the move.

But Moyer's worries weren't over. Long-time Cleveland veteran Dale McDowell of Rossville, Ga., overtook Moyer just before the halfway point, and Moyer ended up briefly slipping back to third behind Chris Madden of Gray Court, S.C.

But Moyer turned up the wick late, especially running the high groove in turns three and four, to get back into contention. He overtook McDowell exiting turn four on the 43rd lap and held on the rest of the way. McDowell and Madden chased him to the finish while Jeep Van Wormer of Pinconning, Mich., and hometown driver Billy Mayo rounded out the top five.

"We set up for (the high groove) and its where the car was comfortable and definitely fastest," said Moyer, who was loudly greeted in victory lane by the track's huge crowd. "I just couldn't get my car to scotch over there off of turn two because the track kind of drops off on the top, so I would lose ground there. I finally started running about quarter throttle through there and then I wouldn't lose anything to Dale. The track was in great shape and I think the fans got to see a great race."