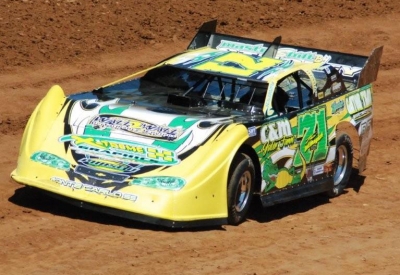 BAKER La. (March 29) — Chris Wall of Holden, La., won at Baton Rouge Raceway on Sunday, but it wasn't exactly a Sunday afternoon drive. The polesitting Wall had to outduel sixth-starting James Ward of Lettsworth, La., in the 40-lapper for his first victory on the O'Reilly Southern United Professional Racing tour since 2006.

Wall led the first two laps before Ward grabbed the lead on a daytime racing surface at the quarter-mile oval that allowed three- and four-wide racing. The low-running Ward stayed in control the next 12 laps, but a three-car tangle in turn one that saw Marlon Wild's car flip and come to rest upside down on the concrete wall halted the action. Wild wasn't injured in the pileup that included Eric Neal and 16th-starting Kenny Merchant, the reigning SUPR champion.

Two laps after the restart, Wall worked his way back past Ward and held on the rest of the way in the third SUPR event of the season on a beautiful afternoon. He earned $2,500.

Former series champion Ray Moore of Shreveport, La., finished second while Howard Willis of Dayton, Texas, rallied from 14th to finish third. Ward settled for fourth and Merchant stormed back to fifth after being part of the race's most serious caution.

Notes: Wall's MasterSbilt Race Car has a Wall 2 Wall engine and sponsorship from C&M Gator Farm, Gator Trax Boats and GVS Racing. ... Wall has eight career SUPR victories. His most recent before Baton Rouge was Sept. 4, 2006, at Simpson County Motorsports Park in D'Lo, Miss. ... The March 28 SUPR event at Pike County Speedway in Magnolia, Miss., was rained out and rescheduled for April 25. ... Next up for SUPR competitors is a three-race weekend on April 9-11, with Thursday-Friday events at Batesville (Ark.) Motor Speedway before the series heads to Riverside International Speedway for its first-ever event at the West Memphis, Ark., oval. The Riverside event is co-sanctioned by the O'Reilly Mid-South Racing Association. ... The series runs on the concrete at Monroe (La.) Motor Speedway on April 18. A SUPR-only practice session is scheduled for April 17 at Monroe.